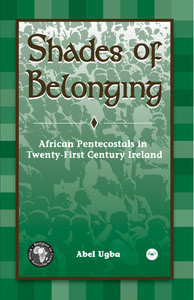 This book is the first study of the religious life of African immigrants in Ireland. Based on original research the book makes a significant contribution to our knowledge about Africans in Europe more generally.

For over a century Ireland was a source of emigrants to other parts of the world. Now it has become an attractive destination for immigrants. Africans in the streets of Dublin are a common sight. During Ireland’s 2006 census exercise, 35,326 people said that they were nationals of African countries, 40,525 described their ethnic background as African, and 42,764 claimed Africa as their birthplace. The total population was 4.2 million, of whom 3.7 million are Irish. The remaining half-million people described themselves as non-Irish or part-Irish.

One of the immediate consequences of the increased numbers of African immigrants is the formation of new types of organisation. Arguably the most prominent are Pentecostal churches led by sub-Saharan Africans. African-led Pentecostal churches are one of the key signifiers of the African presence in twenty-first century Ireland.

This book examines the history, nature and activities of Ireland’s African Pentecostal churches, based on ethnographic observations, detailed interviews and surveys. It documents recent developments in Ireland’s immigration policies, especially those affecting sub-Saharan Africans. While acknowledging the social, emotional and material uses of Pentecostalism, the book analyses the interfaces between Pentecostal beliefs and the interpretation of self, others and social reality. It examines theories of religion and of immigrant acculturation and integration. It assesses the implications of religiously-motivated self-understanding for the position of African Pentecostals in Irish society.

This is the sixth volume in the Religion in Contemporary Africa Series edited by James L. Cox and Gerrie ter Haar

ABOUT THE AUTHOR
ABEL UGBA, PhD is a senior lecturer in the School of Social Sciences, Media and Cultural Studies, University of East London, London. His academic qualifications and professional experience relate to journalism and sociology. He is the author of Dear Mama…an African Refugee Writes Home, a fiction based on true-life accounts.