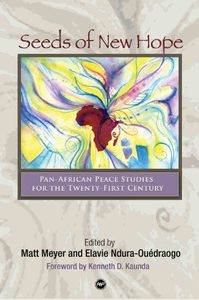 Seeds of New Hope: Pan-African Peace Studies for the Twenty-first Century brings together leading academics and activists from four continents, presenting on issues relating to war and peace in Africa. With a focus on areas of positive change and concrete developments in justice-based initiatives, these essays refute the stereotyped view of Africa as a tragic, war-torn region. Thematic, continent-wide overviews are combined with country-specific references, making this volume accessible and insightful for scholars and students alike. Pan African elder Bill Sutherland stated, "At the time of the liberation movements, there was a lot of hope, yet there were also the seeds of the troubles to come. Today, there are a lot of troubles, but in these presentations lie the seeds of new hope."

Seeds of New Hope brings together a new generation of scholars and activists, working to build what Africa's founding fathers and mothers hoped to bequest. Those seeking a true peace must study and reflect upon these important contributions.
—Kenneth D. Kaunda, from the foreword

A very much needed book, bringing Africa to peace studies and peace studies to Africa, hopefully for the benefit of both. The authors dig into the immense complexity of Africa; a major reason why peace researchers have stayed away. Africa offers no simple bipolarity like the Cold War in Europe or the US Empire in Latin America. On the other hand, one often forgotten polarity is given ample treatment in the book: gender.
—Johan Galtung, Director of TRANSCEND; pioneer of the field of peace research

As colonialism was coming to a close fifty years ago, Africa’s paramount problems were supposed to be poverty, ignorance and disease. The need for peace was an afterthought. This volume is an illustration of how far peace theory and peace studies have now reached. The authors are among the leading peace-researchers of the post-colonial era. Various forms of violence and conflict are diagnosed, and new African solutions are explored. This book should be compulsory reading for policy-makers, peace-researchers and even peacekeepers in uniform.
—Ali A. Mazrui, Director of the Institute of Global Cultural Studies, State University of New York, Binghamton.

ABOUT THE EDITORS
MATT MEYER is the founding Chair of the Peace and Justice Studies Association, and a co-convener of War Resisters International Africa Working Group. Combining scholarship with practical social change, he also serves as the Educational Director of an alternative high school in New York City. Meyer is the author of Time is Tight: Urgent Tasks for Educational Transformation-Eritrea, South Africa, and the USA and co-author (with Bill Sutherland) of Guns and Gandhi in Africa: Pan African Insights on Nonviolence, Armed Struggle and Liberation

ELAVIE NDURA-OUÉDRAOGO is Associate Professor of Education at George Mason University. Her articles have been published in various scholarly journals, including the Harvard Educational Review. She has served as Board Member of the Center for Holocaust, Genocide, and Peace Studies, and as President of the Northern Nevada Chapter of the National Association for Multicultural Education (NAME). She is also the founder of the Burundi Schools Project.