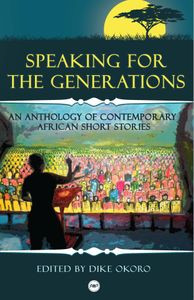 In forty-eight stories that showcase the rich narratives, cultures, and customs of the continent, the reader will become acquainted with both established and emerging African male and female writers. Themes include love, family, relationships, death, politics, exile, childhood, gender, struggle (personal and communal), rage and hope.

“This anthology boasts two major strengths. First, it brings North Africa into a conversation with sub-Saharan Africa as very few such anthologies of African literature have so far done. Second, there is an invigorating freshness about the new talents brought to our attention here as well as an urgency in their reflections on contemporary African and global issues. Dike Okoro should be commended for the imagination he has shown in putting together a collection of stories anyone--student, teacher, or general reader--would love to possess and share with others.”

“The stories in this collection clearly capture the changing face of contemporary African societies as they reveal the fears and dreams, the confusion and clarity of the cultures they reflect. While depicted situations in the narratives are often precarious at best, the constant, a hope for a better tomorrow or a better existence, pulses at the heart of these stories.”

Dike Okoro, poet, short story writer, editor, essayist and critic, has published widely. His creative work and non-fiction have appeared in major journals/magazines/books, including Yellow Medicine Review, Witness Magazine, Botsotso, Farafina, African Writing Online, JALA: Journal of African Literature Association, IRCAL: International Research in Contemporary African Literature, Dictionary of Literary Biography: African Writers Series and Emerging Voices of Post Colonial African Literature. Okoro is the recipient of a Sam Walton Fellowship (2004) and the US/South Africa Education/Research Grant (2003). His major publications include the poetry collection Dance of the Heart and two anthologies of poetry: Songs for Wonodi and Echoes from the Mountain: New and Selected Poems by Mazisi Kunene. He is an assistant professor of English and World Literature at Olive-Harvey College, Chicago.