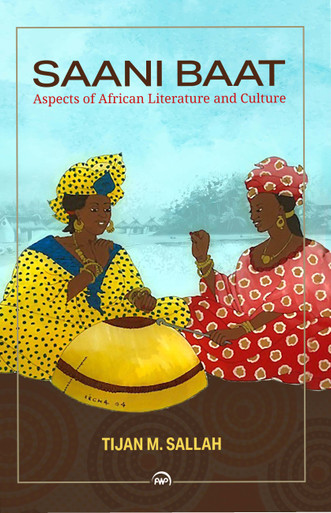 The title of this book of literary criticism Saani Baat: Aspects of African Literature and Culture, comes from the Wolof, Saani Baat, which literally means “to throw one’s voice” in a conversation. In this rich and path-breaking collection of literary essays and criticism, the noted Gambian writer, Tijan M. Sallah, explores in provocative essays the theme of whether there is a Gambian national literature and how it differs from the literature of Senegal; explores the metaphysical systems and oratures of the Wolof and Jola peoples of Senegal and The Gambia; discusses the new Gambian poets and their poetry, and examines the writings and life of the late veteran Gambian writer, Lenrie Peters.  In critically evaluating the metaphysical systems of the Wolof and the Jola, the book presents enormously rich, new information that has never been documented before and that had remained largely buried in oral traditions.  The book also revisits and sheds new light on the diaspora movement, the Harlem Renaissance, and reclaims the poet-slave, Phillis Wheatley, the founding mother of African American literature, to her Senegambian origins.  The book ends by looking at the poetry of Nigeria’s Tanure Ojaide, one of Africa’s preeminent poets, and also takes a look at the life of that veteran African novelist, Chinua Achebe, who has been described as the “founding father” of the African novel.  This book is an intriguingly rich collection of literary essays that is bound to provoke discussions among those interested in Senegambian, Nigerian and, for that matter, African literature.

Tijan M. Sallah is The Gambia’s most famous poet after Lenrie Peters and one of Africa’s most significant writers. Many of his poems and short stories appear in several major African poetry and short story anthologies. In 2014, Cambria Press of New York published a book of critical perspectives by various scholars on his writings edited by Professor Wumi Raji. A Ph.D. holder in economics, Sallah has taught economics at several American universities. He recently retired form the World Bank, where he was a sector manager for agriculture and rural development. He is currently leading efforts to build an Africa World Museum and Library in The Gambia. This is his first book of literary and cultural criticism.