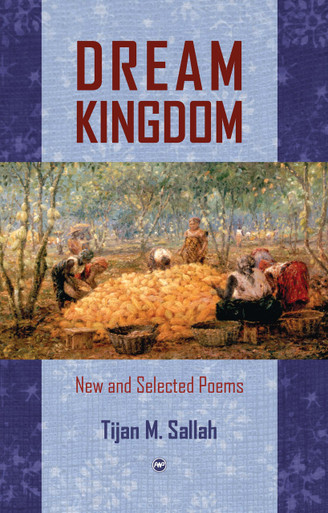 Dream Kingdom is a fascinating selection of the Gambian poet Tijan M. Sallahs poetry, which in his own words reflects the mystical and mythical basis for all poetry. This book includes selections from most of the poets four collections of poetry: When Africa Was a Young Woman (1980), Kora Land (1989), Dreams of Dusty Roads (1993), and Harrow (unpublished). It also includes some unpublished new poems. The poet notes, the volume is a backward gaze at midlife, a selective stocking Midlife the poet reflects, is the peak of the mountain of life. I look down and fear the fall. Dreams descend from their unrealism to the ground. The poems in this selection reflect a rich and generous imagination, spanning over twenty five years of poetic artistry, ranging from personal experiences of coping with adversity; ordinary experiences of family, love and friendship relationships; to struggles with African politics; to journeys to Persia and ethical musings on America and global injustices in Bosnia and elsewhere; to intellectual flirtations with the mythic and the mystical. These poems are deceptively simple as they are amazingly rich, and they paint the imaginative world of one of Africas most talented poets of the post-Achebe and Soyinka generation.

[These] poems have the immediacy of folklore, and reverberate with the power of an imagination large and generous enough to encompass not only the old civilization of the poets homeland, Africa, but also the relatively new one of America. It is the images and perceptions they quicken, however, that hold my interest in poem after poem. A fine [selection]!

[This] work seems produced by a sure hand! enjoy it!

a poet of fine talent. When he touches the subject of his homeland, Africa, there is aliveness, a depth, a sense of time and culture, and an accuracy of portrayal we seldom [experience]

.there is little question about [his] talent.

"[This selection] offers us the [the poet's] new work and work selected from previous collections. His touch is still sure; the images sharp; and the phrasing precise. And he has a continuous awareness of contemporary events particularly shown in references to Mandela and the women of Soweto. ... a welcome new collection."

ABOUT THE AUTHOR
TIJAN M. SALLAH is one of the leading African poets of the post-Chinua Achebe and Wole Soyinka generation. Born in Sere Kunda, Gambia, in 1958, he was educated in the US at Berea College and Virginia Polytechnic Institute where he received a Ph.D. in economics. A former professor of economics at several American universities, he now works for the World Bank. Author of several books of poetry, short stories, ethnography, literary criticism, scholarly articles, whose works have been featured over the National Public Radio and the BBC, Dr. Sallah most recent book is a biography of Africas foremost novelist, Chinua Achebe. He is currently completing his first novel on the Abrahamic religions in Africa.