REMINISCENCES OF MY LIFE, by Emmanuel Abraham 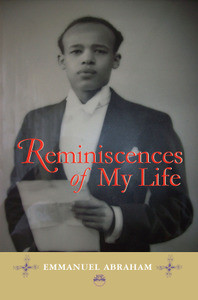 REMINISCENCES OF MY LIFE, by Emmanuel Abraham

“This book is an exemplary narrative about the inner workings of Emperor Haile Sellassie’s government. It contains an account of some of the personalities who held high government offices and the state of ecumenical relations during the imperial period. Yet, the history of this period will not be complete until those who, like His Excellency Ato Emmanuel Abraham, had the privilege of serving in various positions of responsibility in the emperor’s government offer us their reminiscences….What is expected of the former officials, who are now in their twilight years, is not to criticize from the sidelines what others have written, but to present their version of the ‘true account of the period’ with the same care for quality and organization evident in this memoir.”
— Prof. Tadesse Tamrat,
from the Amharic edition of Reminiscences of My Life

“Students of Ethiopian history and politics are greatly indebted to Ato Emmanuel Abraham for having accomplished the invaluable task of writing down his reminiscences with remarkable detail and elegance.…Having served Emperor Haile Sellassie in various capacities for nearly four decades and half (1931-1974), Ato Emmanuel is eminently qualified to tell that story. The diversity of posts that he came to occupy during that period—headmaster, legation secretary, director-general, ambassador, and minister—has given his story a richly variegated character. The conscientiousness with which he had kept records of his official correspondence gives his narrative a wealth of documentation that is uncommon in a work of this genre. His personal integrity and relatively independent character has also invested his account with a degree of detachment that is not so often encountered among loyal public servants.…With this book, Ato Emmanuel has done great service to all students of history as well as to the country and the church that he served with so much dedication.”
— Prof. Bahru Zewde,
Journal of Ethiopian Studies, Vol XXIX, No. 1, June 1996

“Reminiscences of My Life offers an invaluable window on less dramatic, but critical developments in the evolution of modern Ethiopia such as the early years of the Tafari Mekonnen School, the beginning of a modern provincial administration in the 1920s, and the impact of the work of the Ethiopian Evangelical Church Mekane Yesus on the life of many Ethiopians. Equally valuable is the rare insight the author provides into Emperor Haile Sellasie’s life in exile during the Italian occupation, which he witnessed from close quarters, and the political intrigues and infighting within the imperial government, which he experienced on the receiving end. What makes this memoir unique is the author’s perspective as the emperor’s confidant who was nevertheless kept on the fringes of power, and his willingness to tell his story without undue prejudice or embellishment.”
—Prof. Ezekiel Gebissa,
Kettering University, Flint, Michigan, USA

ABOUT THE AUTHOR
Emmanuel Abraham is one of the leading Ethiopian personalities of the twentieth century. Born in 1913 in Boji, western Ethiopia, he attended school in his birthplace and in Addis Ababa. He began his career as a teacher and headmaster in eastern Ethiopia and entered public service in February 1939 at the Ethiopian Legation in London. Emperor Haile Sellassie I later appointed him to various diplomatic posts in London, New Delhi, Rome, and high level government positions in Addis Ababa, including among others Chief of Political Affairs in HIM’s Private Cabinet; Minister of Posts, Telegraphs and Telephones; Minister of Communications; and finally, Minister of Mines. In 1974, the military junta which overthrew the imperial government detained him along with other former officials but he was freed after nine months.

In 1963, Emmanuel Abraham was elected President of the Ethiopian Evangelical Church Mekane Yesus and led the church for the next 22 years. Emmanuel Abraham, 97, survives his wife, Elleni Alemayehu, who passed away in 2002. They have four children and three grandchildren. He lives in Addis Ababa.