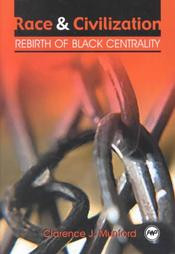 This treatise offers civilizational historicism as the theory and practice of World Black struggle against global white supremacy in the 21st century. Divided into eleven chapters, this work is a theoretical elaboration and substantiation of empirical discoveries presented in Race and Reparations: A Black Perspective for the 21st Century (1996) and in a three-volumed study of the Atlantic slave traffic and slavery, Black Ordeal (1991).

Black liberation has wrestled with white racism for an entire era. Civilizational historicism is the first coherent and comprehensive doctrine formulated to champion Black Realpolitik self-interests in Africa and the Diaspora. It is rigorously secular and scientific. The author traces the theory’s intellectual pedigree back to analytical principles and axioms that were born long ago in the Nile Valley and in ancient India and China. He establishes civilizational historicism as a worldview independent of the European intellectual tradition. White social thought and political economy from the Enlightenment to the present are exposed as traps for theorists of African descent.

ABOUT THE AUTHOR
Clarence J. Munfordis Professor of Black Studies and History at the University of Guelph, Guelph, Ontario. An Ohio-born African American, C. J. Munford has taught in universities in Nigeria, Europe, and U.S. He is the recipient of the 1997 African Heritage Studies Association Book Award for Race and Reparations: A Black Perspective for the 21st Century (AWP, 1996).