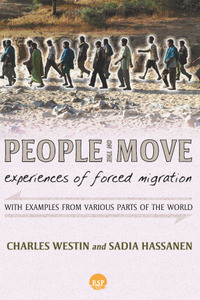 This volume deals with various issues of forced migration from developing countries, in some cases to neighbouring countries, in others to countries in the developed world. The forty-year period covered is from the late 1960s. In some cases the migration processes the contributors concentrate on resulted in settlement on a permanent basis in a receiving country, in their examples with strong links to diasporic communities elsewhere; in other cases the outcome is that individual families making up the diasporic cultural community go transnational themselves, living here at times, living there for periods, commuting and transcending national, cultural, political and linguistic boundaries. Chapters presenting empirical examples are guided theoretically, bringing observations in to theoretical interpretations. These chapters are interspersed with theoretical expositions of concepts such as durable solutions, nation state, citizenship and transnationalism.

Sadia Hassanen’s contributions to this volume are based on qualitative ethnographic studies of Eritrean forced migrants in several countries. She was herself one of the refugees, an experience which facilitates her access to the experiences related to her by Eritreans in the Diaspora. She is a trusted listener. The situation surrounding forced migration from Eritrea is thus the volume’s principal empirical focus, although it is supplemented by related experiences of forced migrants from Uganda, Chile and Iraq.

Fleeing Eritreans sought refuge in neighbouring countries of Sudan and Egypt, in some cases in Saudi Arabia. Some even managed to make it to Europe, North America and Australia. Ugandan Asians came to Europe and North America, very few however to Kenya, Tanzania, India or Pakistan, because these countries closed their borders. Chilean refugees were accepted in some parts of Latin America, for instance by Cuba, Mexico and Venezuela, but many other countries in southern Latin America were at the time led by military dictatorships (Uruguay and later Argentina, for example). Mainly Chilean refugees were accepted in various European countries.

One chapter describes how refugees from Eritrea manage to a make a life for themselves in Eastern Sudan, many of whom depend on remittances from relatives who are better off in Arab countries, Europe or Australia. One chapter looks at Eritrean migrants who have settled in Melbourne, Australia. Otherwise the situation in Sweden is our main focus among receiving countries. Sweden has a long history of receiving forced migrants from many parts of the world. Westin’s empirical chapter relates the story of the Ugandan Asians who were accepted by Sweden in 1972, and the establishment of their diasporic community. Unlike the fifty years of forced continuous migration from Eritrea, the expulsion of Asians from Uganda was a one-time event. Erik Olsson, who participates with two chapters in this volume, has studied the Chilean transnational community in Chile and Sweden since the early 1990s. Both Westin’s and Olsson’s studies have a longitudinal dimension to them. We can follow developments over a period of time for more than one generation.

Special attention is given to the Eritrean Diaspora. The inclusion of several articles on the Eritrean Diaspora is justified because little is known about this exile community from a research perspective. Of particular interest is the portrayal of the informal support network established by Eritrean émigrés in Stockholm, Sweden.

CHARLES WESTIN is Emeritus Professor of International Migration and Ethnic Relation at Stockholm University where he served as Director of CEIFO (the Centre for Research in International Migration and Ethnic Relations) from 1994 to 2008. His research interests include migration theory and interethnic relations. At present he is involved in studies of the indigenous Saami and Roma minorities of Sweden. He edited Identity Processes and Dynamics in Multi-Ethnic Europe (2010) with José Bastos, Janine Dahinden and Pedro Góis. Currently Westin is chairperson of the Expo Foundation, a privately-owned research foundation started 1995 in Sweden by the author Stieg Larsson with the aim of studying and mapping anti-democratic, right-wing extremist and racist tendencies in society.

SADIA HASSANEN, Ph.D. in Human Geography is affiliated as researcher at the Department of Social Anthropology, Stockholm University. She conducted research among Eritrean refugees in eastern Sudan about the effect of migration on repatriation, integration or further migration on the community of Eritrean diaspora published in her book Repatriation, Integration or Resettlement (2007). Alongside her research Hassanen has taught at Stockholm University in BA and master level courses about refugee livelihood and the role of networking among urban and camp based refugees. Currently she is studying the role of Eritrean Diaspora for conflict resolution and democratisation of the country of origin.