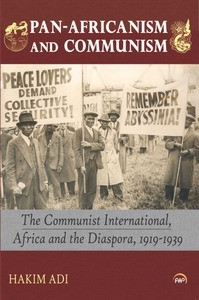 A rich and textured monograph, which is destined to become the definitive work in the field.

Based on new materials from the archives of the Communist International in Moscow as well as other established sources, Professor Hakim Adi has given us the very first book that explains the history and activities of The International Trade Union Committee of Negro Workers (ITUCNW) in relation to the attainment of black emancipation, the role of such leading figures as George Padmore, the nuanced discussions within the communist movement on Pan Africanism and how to attain liberation from colonial domination. The book abounds with new insights, original reflections, fresh interpretation and new conclusions on what was generally called the Negro Question.

The struggle by Africans at home and in the Diaspora against the innumerable forms of exploitation and discrimination existing in the 1920s and 1930s was supported by only one major international organisation, the Comintern. This remarkable pan-Africanist approach is fully documented and analysed in Hakim Adi’s book that links the struggles in Africa, Europe and the Americas.

HAKIM ADI (Ph.D. SOAS, London University) is currently Reader in the History of Africa and the African Diaspora at the University of Chichester in England. He is the author of West Africans in Britain 1900-1960: Nationalism, Pan-Africanism and Communism (London, 1998); joint author (with M. Sherwood) of The 1945 Manchester Pan-African Congress Revisited (London, 1995) and Pan-African History: Political Figures from Africa and the Diaspora since 1787 (London, 2003).

He has written widely on Pan-Africanism and the modern political history of the African Diaspora, especially on Africans in Britain and has also written three books for children.

The Harriet Tubman Series on the African Diaspora