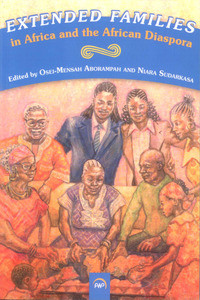 This volume presents a descriptive and interpretive analysis of the nature, functioning, and variations of extended families in Africa and the African Diaspora. Extended families have played important roles in the societies of the African world, where social safety nets tend to be incomplete or even non-existent. In these societies, families are able to cope with the stresses and strains of everyday living by participating in a network of reciprocal assistance provided by members of a larger group: the extended family, the lineage, or even the clan.

The rapid demographic and industrial developments these countries are experiencing have not led to a destruction of the traditional pattern of extended family network, as structural-functional theories had heralded. Many factors account for the persistence of kinship ties, including demographic, economic, and cultural ones. But what really do we know about extended families in the African world cross-nationally? What is the nature of the relationship between extended families and their constituent conjugal unions in black societies? What factors shape the self-esteem and the overall development of black children across various African societies and those in the Diaspora? What gaps exist in our comparative analyses of families across the African world? How can we best fill these gaps? These are a few of the questions addressed in this volume in addition to demonstrating that people who live with or apart from their relatives nonetheless care for them deeply and provide various types of assistance. The volume contributes to the on-going efforts to increase the amount of comparative literature that would provide a consistent picture of extended families in the African world.

ABOUT THE EDITORS
OSEI-MENSAH ABORAMPAH is an Associate Professor and former chair in the Department of Africology, University of Wisconsin-Milwaukee. He received his undergraduate education and earned his B.A. (Hons.) from University of Ghana-Legon, his master's degree from the University of Guelph, Ontario, Canada, and Ph.D. from the University of Wisconsin-Madison. His academic interests range from traditional to modern cultures of Africa, Black America, and the Caribbean, with special focus on West African, African American and African-Caribbean family patterns, as well as the general problems of women and development in African societies. He has published numerous articles on these topics in such refereed journals as Journal of Biosocial Science, Journal of Black Studies, Journal of Caribbean Studies, Human Organization, Ethnology and Journal of Intergenerational Relationships.

NIARA SUDARKASA spent most of her career as a Professor of Anthology, African and African American Studies at the University of Michigan in Ann Arbor. She also served as Associate Vice President for Academic Affairs before leaving to become the first female President of Lincoln University on Pennsylvania (1987 to 1998). Her various publications include Where Women Work, on Yoruba Market Women, and The Strength of Our Mothers: Essays on African and African American Women and Families.