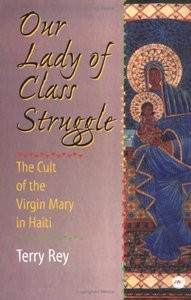 This discussion of the cult of the Virgin Mary in Haiti is the fruit of one of the most extensive ethnographical studies on religion yet conducted in the Caribbean. Rey reveals the differences between the Marian devotion of the Haitian poor and that of the Haitian elite, explains the forces that shape and underlie these differences, and explores the phenomena of Marian symbols, beliefs and practices with their correspondents in Haitian Voudou.

Data generated through over four hundred interviews with Catholics and Voduisants and extensive participant/observation at Marian feasts throughout Haiti over a four-year period is analyzed and explained with references to the theories concerning religion and class of Antonio Gramsci, Max Weber, and Pierre Bourdieu.

Two case studies personalize the elite/popular schism at the heart of Haitian Marianism, while a historical survey of the roles that the Mary symbol has played in Haitian politics reveals both the ways in which the dominant in Haitian society have, since the arrival of Columbus in 1492, attempted to manipulate the symbol and myth of the Virgin to legitimize and perpetuate the social inequalities upon which their power and privilege depend, and instances of Marian appropriation by the subjugated, who have at times transformed Mariology into a source of inspiration for struggle against domination.

Historical research also discloses how the Catholic Church hierarchy has aimed to employ the Virgin Mary in its epic campaign to eradicate vodou from Haitian society. This campaign has failed in large part because the Virgin Mary in Haiti is widely assimilated with ezili, the voudou spirit of lover and sensuality, making Haiti's Virgin uniquely Haitian. In sum, the effects of Vodou and of class struggle on Haitian Marianism are discussed and analyzed.

ABOUT THE AUTHOR
Terry Ray is assistant professor of African and Caribbean Religions at Florida International University at Miami and a former professor of Sociology of Religion at L'Universite d'Etat d'Haiti in Port-au-Prince, where he lived for five years and also served as director of the Human Rights Fund.