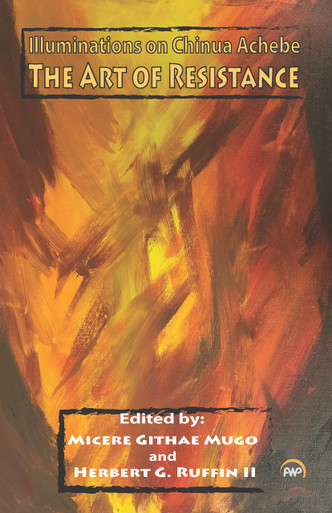 This book of essays, co-edited by Mῖcere Gῖthae Mũgo and Herbert Ruffin II, is the latest critical volume of essays on the late Achebe, celebrating him as an iconic literature and orature genius. The essays also reflect upon ways in which Achebe’s writings and teachings, viewed as examples of “the art of resistance,” have impacted Africa, the so-called “Third World”/Global South, as well as the world at large more than fifty years since the publication of the much decorated Arrow of God.  However, although Arrow of God is the highlight of celebration at the novel’s fiftieth anniversary since publication, there is a deliberate effort to “illuminate” it within the larger contexts of not just the whole body of Achebe’s writing and especially the trilogy; but his legacy in general. Equally significant is the fact that the contributors are not limited to specialists in orature, literature, literary criticism and creative writing. Rather, the “illuminations” emanate from a rainbow of intellectual heritages representing the arts, the humanities and the social sciences—a testimony to the fact that Achebe, the novelist, has indeed been a teacher to many as his essay “The Novelist as Teacher” so compellingly establishes in advocating the imperative of linking art to the totality of lived reality. The book provides fresh perspectives and indeed, innovative theoretical formulations that offer insightful original critical commentaries on Achebe and his works, illuminating him under new light. Some of the essays in the collection are provocative and even controversial, making the book a fascinating read.

*************************************
In commemorating the 50th anniversary of Arrow of God, through scholarly re-assessment as well as personal reflection, the editors and distinguished contributors have produced a worthy festschrift that honors “the father of African literature” for the role that he saw for himself:  the writer as teacher.
--Anne V. Adams, Cornell University; SUNY Cortland

This thoroughgoing engagement with one of the world’s most celebrated writers provides a comprehensive rereading of Chinua Achebe’s Arrow of God within the wider context of his expansive oeuvre and the political and cultural sensibilities that have informed his imaginative disposition. Thoughtfully argued, and written with clarity and erudition, the essays here galvanize some of the most current developments and contestations in the tradition of critical theory to “illuminate” Chinua Achebe in original and refreshing ways. Illuminations on Chinua Achebe is certainly a masterful collection, an essential contribution to our understanding of the complexities of the interplay between writing and resistance in the literary vision of Chinua Achebe.
--Alamin Mazrui, Professor, Rutgers University

Mugo and Ruffin have accomplished that rare feat of bringing to light new reasons to celebrate the life and work of one of African literatures founding figures. From the ranks of the ancestors, Chinua Achebe continues to reveal the complexities of the postcolonial condition. Here scholars, authors of fiction, editors and historians elucidate why Arrow of God, a far less-studied novel than his first, is essential to comprehending Achebe's impact on African, and indeed, world letters. A welcome gender balance in contributors distinguishes this collection, sure to become a key sourcebook for Achebe's oeuvre, and particularly his third novel.
--Tsitsi Jaji, Associate Professor of English, University of Pennsylvania

In remembering the work and legacy of the great African literary icon, Chinua Achebe, through the lens of his classic novel Arrow of God, this collection of essays continues the fascinating facility that Achebe himself displayed for speaking to so many across various disciplines.  In this volume, we meet the consummate creator of a literary orature that was an aesthetic point of departure in African creative writing, with which Achebe, the 'modern griot' produced a passionate yet engaging exposition on the personal, societal and global costs of colonialism. These essays contribute to ensuring that Chinua Achebe, the teacher, husband, father and gentle 'nice guy' will never be 'truly dead' because he will not be forgotten.
--Tsitsi Dangarebga, Novelist/Filmmaker, Director, Institute of Creative Arts for Progress in Africa (ICAPA) Trust

Here, some of our greatest intellectual minds engage the work of one of Africa’s greatest writers.  The result is that these critics and scholars from across the humanities and social sciences illuminate and demonstrate news ways of reading Achebean aesthetics, his translatability across languages, cultures and academic disciplines, and his use of literary forms to carry orature. It is a major intervention: today, a landmark in the African literary tradition and tomorrow, a beacon for future African scholars and writers.
--Mũkoma wa Ngũgῖ, Assistant Professor of English, Cornell University

The publication's style and content provide a unique and refreshing read which feeds and seeds the world with so much literary wealth from Africa that indeed the appetite it whets can never be appeased. It instructs, moves the soul, carries our senses to different parts of the world and makes an everlasting statement. Chinua Achebe is alive in so many ways. He did not “die.” Thank you Professors Mῖcere Gῖthae Mũgo and Herbert G. Ruffin for your part in eternalizing this icon of the spoken and the written word.
—Philo Ikonya, Poet, Novelist and Human Rights Activist

ABOUT THE EDITORS
MICERE GITHAE MUGO is Emeritus Meredith Professor for Teaching Excellence, who retired from the Department of African American Studies, Syracuse University, in May 2015.