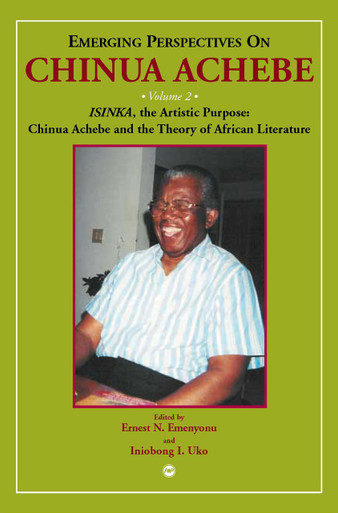 Chinua Achebes influence on contemporary African Literature is as much evident in his art of the novel, as his articulation of African poetics and aesthetics in his extra fictional pronouncements. He is as much the father of the modern African novel, as he is the pioneer theoretician of African literary criticism. Whereas Things Fall Apart established for African creative writers the art of the African novel, such critical essays as The Role of the Writer in a New Nation, The African Writer and the English Language, The Black Writers Burden, and What has Literature got to do with it?, read like conscious blueprints, defining for teachers, readers, and critics of African literature, appropriate directions for objective literary criticism.

ISINKA (Igbo term for artistic purpose) establishes Chinua Achebes legacies to African literary criticism over half a century. The book starts with a Prologue followed by thirty highly engaging chapters, and ends with an Epilogue. The chapters are grouped into six parts namely: Art and Aesthetics, Igbo Worldview and Christianity, The Artist in Society, Visions of History, African Womanhood, and Influences. In these essays, literary scholars from various parts of the world, attempt dynamically to assess and establish how much Chinua Achebes extra fictional ideas about African Literature or Literature in general, are justified in his own creative works. ISINKA is thus a logical sequel to OMENKA which examined the dimensions of Chinua Achebes achievements as Africas leading novelist of the 20th century, and one of the worlds best, dead or alive.

ABOUT THE EDITORS
ERNEST N. EMENYONU is Chair of the Department of Africana Studes at University of Michigan, Flint. He served as Deputy Vice-Chancellor at University of Calabar, Nigeria, and also as Provost of Alvan Ikoku College of Education in Owerri, Nigeria. He is the author of several works of criticism on African literature as well as of fiction including a collection of short stories and four childrens books.

INIOBONG UKO teaches African, African American, and Caribbean Literatures in the Department of Africana Studies, University of Michigan- Flint, where she is a Visiting Assistant Professor, on sabbatical from her home university, the University of Uyo in Nigeria. She specializes on African and Diaspora Womens writings. Her articles have appeared in leading literary journals in Africa and the United States. She has recently completed a seminal book, Gender and Identity in the Works of Osonye Tess Onwueme.