HIRUT AND HAILU AND OTHER SHORT STORIES, by Teodros Kiros 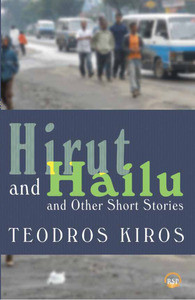 HIRUT AND HAILU AND OTHER SHORT STORIES, by Teodros Kiros

"The stories of Teodros Kiros hover on the edge of personal and political agendas. His characters are bound by tradition that they do not accept, trapped between the desire to leave beautiful, parched Ethiopia for a cultivated life in Europe or the United States and the need to deliver their native country from its poverty and political stasis. Despite their love for their country and their people, their dilemma is not easily resolved, so they must live with contradiction, hoping for a solution."

“Hirut and Hailu and Other Short Stories, an intriguing first collection by Teodros Kiros set in both Addis Ababa and Boston, is a series of intimate portraits of human beings searching for their heart’s desire in often desperate circumstances.  The first part of the collection follows the relationship of Hirut and Hailu, two sensitive young people in love against the backdrop of political and economic turmoil in modern-day Ethiopia.  Subsequent stories explore tragedy and loss on many levels—from the injustice committed upon a poor laborer selling figs to the more intimate and fleeting realization of moral failure by a college professor unable to help a stranger in need.  With honesty, intelligence, lyricism, and a loving concern for his characters, the author reveals to us much that we need to know about the sadness of the current situation in Ethiopia and also about the tragedy that is inherent in all of human life.”

“Like no other contemporary author, Teodros Kiros brings alive the reality of Ethiopia today. From university educated young women who need to sell themselves in discos in order to feed their families, to talented young doctors offered a future in Copenhagen or Boston but with hearts still linked to home, to impoverished gatherers of wild figs tormented by bourgeois schoolboys, to brutal jailers and lonely aging parents, Kiros paints with skill and grace and precision a world undergoing a rapid transition, but still singing the songs of ancient tradition.  A remarkable new voice.”

“Teodros Kiros here offers in Hirut and Hailu and Other Short Stories poignant portrait of love as an effort to pierce through the fog of attrition, cruelty, discontent, and injustice characteristic of a world antipathetic to the struggle for human dignity.  Through at first the lives of lovers from different worlds of class Kiros unveils the unyielding power of the heart, the poetic resistance of the spirit, and the tragic potential of the contingent.

From Addis Adaba, Ethiopia to Copenhagen, Denmark to Cambridge, MA, in the US, the opening novella’s global narrative, followed by tales of death and resistance, brings to the fore the underside of contemporary life in which the affluent and the poor are expected to forget their symbiotic links and pass each other by with at most a glance.  What, this story of love, ethics, and the ineluctability of politics asks, would happen if all were to pause for a moment and really look at each other?   The world, no doubt, waiting beneath, yet all around, might, just might, appear.”

—Lewis R. Gordon, author of Existentia Africana and Professor of Philosophy, African American Studies, and Judaic Studies at the University of Connecticut at Storrs

TEODROS KIROS Professor of Philosophy and English at Berklee College of Music in Boston and a non-resident Du Bois Fellow at Harvard University was born in Ethiopia. He has written ten books and hundreds of articles in journals while contributing weekly columns in International websites. Prof. Kiros produced the internationally acclaimed television program, African Ascent. His book, Self-Construction and the Formation of Human Values: Truth, Language and Desire won the 1999 Michael Harrington Book Award. He is currently finishing his forthcoming novel, Cambridge Days.