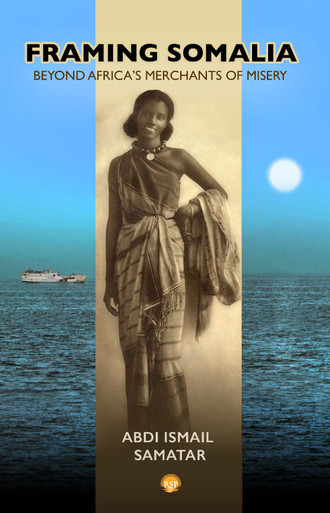 Liberating Somalia from warlords, the corrupt political class, pseudo religious tyrants, and the “Lords of Poverty” requires a bold intellectual and political vision for the country. Framing Somalia renders a clarion call for such an agenda.

Orientalists have dominated writing about Somalis and their cultural and political history. Understanding Somali society through that weltanschauung has been championed by two mutually supportive groups: Lords of “development and humanitarian aid,” and their academic and professional consultants.  This coalition has partnered with sectarian Somali political and professional actors who have benefited from the Somali calamity. The three jointly constitute “Africa’s Merchants of Misery.”

In Framing Somalia, Abdi Samatar goes beyond the gaze of Africa’s Merchants of Misery and offers a fresh and progressive rethinking on Somali cultural and political studies. Rather than turning Somalis, their culture, and politics into an orientalist fossil, this new book offers a more complex, dynamic, and context sensitive rendering of the political and cultural developments in the country over the last century

Abdi Samatar uses three case studies focusing on democratic politics, Islam, and piracy to show case alternative ways of being Somali and understanding Somalia. Finally, much has been said about Afrocentric and decolonized ways of knowing the African experiences, Framing Somalia is a Somalicentric approach to liberating Somali Studies and Somalia.

"In the broadness of its reach, and in the ambitiousness of its political vision, Abdi Ismail Samatar’s “Framing Somalia” is a path-breaking book, one that we, Somalis, and anyone interested in our country, have been waiting for. My heartfelt congratulations to him for having the honesty, the bravery, and the commitment for writing this timely book.”