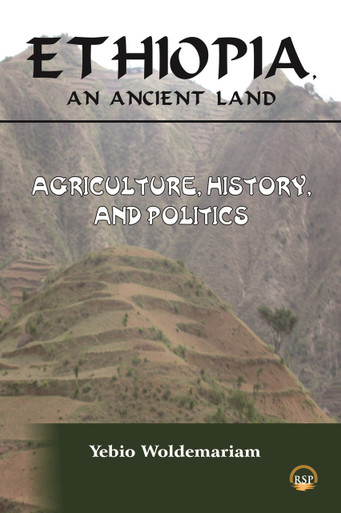 Ethiopia, An Ancient Land: Agriculture, History, and Politics provides the historical perspective on agriculture in Ethiopia. It examines socio-political condition of Ethiopia and its effect on agriculture development beginning from the sixteenth century up to the modern times. The author looks into the correlation between historical and political factors on the one side and the performance of agricultural production on the other. The work is drown from the author’s experience as a consultant and researcher in Ethiopia for over two decades.

The story of modern day Ethiopian agriculture is similar to the story of many countries inhabiting the Southern Hemisphere.  These regions are condemned to the strictly enforced division of labor rules set by the North. Like almost all African countries, Ethiopia too exports primary products with no value added to them. Ethiopia has been and still is a food deficit country. It has been partially sustained by outside aid and support.

The past has a strong bearing on the agriculture performances of the country and also in its political civility and human right issues. Before the 1974 revolution, powerful feudal lords controlled much of the land to the determent of the peasant. The irony is that even after complete nationalization and redistribution of land, Ethiopian peasant did not fare well either. The reason can be found in many interlocked factors that the book tries to shed light on. It tries to find answers to the tantalizing question; what went wrong in a country that was once marveled by earlier travelers for its agricultural endowment. The book, thus probes deep into the agriculture system of medieval and pre-modern Ethiopia in search of an answer.

ABOUT THE AUTHOR
DR. YEBIO WOLDEMARIAM is a graduate of Cairo High Polytechnic Institute. His postgraduate study at Colorado State University was focused on Soil Agronomy. After decades working in agriculture research in Ethiopia, Nigeria and Guyana he pursued his Ph.D at McGill University focusing on developing stable variety of crops adoptable to a variety of agro-ecologic conditions. Dr. Woldemariam is an Adjunct Professor on African-American history at York college of CUNY.