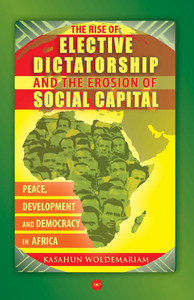 Unable to cope with the changing international political climate of the late 1980s and the growing demand for benevolent leadership, dictatorial regimes in many African countries either stepped aside disgracefully or were forced out of power reluctantly. Subsequently, with the sole exception of Eritrea, African governments had in general liberalized the economic marketplace and promulgated constitutions purportedly to allow political parties to compete for power, to curtail the excesses of the executive branch, and to provide checks and balances against tyrannical rule. Beginning in the mid-1990s, however, there began a drift away from decentralization towards concentration of power in the hands of a few ruling elites. While the deregulation of the African political and economic marketplaces may have given a false sense of hope that Africa was on-track towards democracy and development, there were instances where political and ethnic minority elites employed brute force and exploited traditional (informal) institutions as instruments for the consolidation of elective dictatorship. Elections became theatrical displays of multiparty politics which were neither held regularly nor freely and fairly. Such political posturing has contributed to the marginalization of opposition parties in the decision making process and to the erosion of the peoples latitude of tolerance to political repression and economic disenfranchisement. These phenomena are vividly illustrated in several African countries and, particularly, in Ethiopia where political dissent is increasingly suppressed and political loyalty is unduly rewarded.

Using exploratory research methods and systems theory, this book examines the interactions between elective dictatorship and the erosion of social capital, the legitimacy of the state, and the perception of the public towards multiparty politics in Africa, with a focus on Ethiopia. The author argues that under conditions of ever diminishing levels of public trust, African societies may be unable to resolve conflict peacefully, advance economically, and develop politically. Even if public policies are formulated with the best of intentions, they may not achieve their objectives if the state is widely perceived as illegitimate and if the public is denied meaningful opportunities to participate in the decision making process. In the absence of public trust coupled with widespread perception of illegitimacy of the state, it would be unrealistic to expect durable peace and the mobilization of domestic and foreign resources for the development of Ethiopia, or other African countries. In short, disingenuous subscriptions to multiparty politics and dubious and misguided adoption of free-market economic principles would have negative ramifications on development, democratization, and peaceful settlement of disputes in Africa.

ABOUT THE AUTHOR
KASAHUN WOLDEMARIAM is Assistant Professor of Political Science at Spelman College. Previously, he was a lecturer at Howard University and Visiting Scholar at the University of Witwatersrand. Dr. Kasahun is the author of Myths and Realities in the Distribution of Socioeconomic Resources and Political Power in Ethiopia (2006) and has had various articles published in international newspapers including the Financial Times, The Guardian, and BusinessDay. Some of the topics he has written on are Selling-Investor Friendly Friendly Image of Africa, The Real Power of Ballots, and Bankrolling NEPAD from Home.