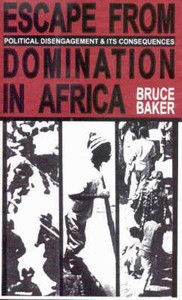 "The evasion of power...has proved to be the most devastating Answer that Africa's poor could give to the irresponsibility of their rulers."
—John Lonsdale, Political Accountability in African History

What is not done is a factor in political analysis. Non-voting, non-rebellion, non-membership, non-conformity, non-payment of taxes and non-formal employment are often overlooked. This is the escape from domination which is known as disengagement.

Africans have long resorted to a range of strategies to survive domination. Confrontation makes the headlines but is frequently unsuccessful. Alternative strategies that are within reach entail minimum risk, are, for many, an improvement on doing nothing.

The current debate on Africa focuses on improving the performance of the economy and activity of the state. Yet disengagement constitutes an erosive force working against the best laid plans. Programmes to establish good governance and economic growth must take this factor into account.

In this book Bruce Baker provides a bold and valuable model for students of third world politics and for those agencies concerned with sustaining democracy in Africa.