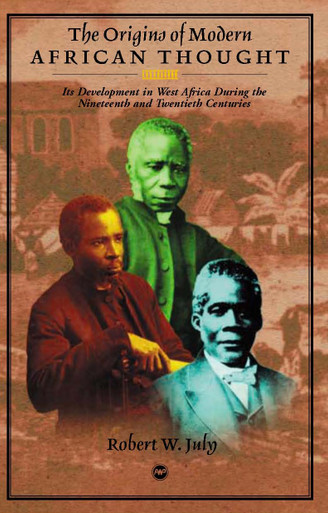 This book is a study of intellectual antecedents to those ideas that propelled the African independence movements of the 1950s and 1960s.

For the better part of two centuries, racial domination has been the central concern of African social thought. Other questions, among them national identity, the role of chieftaincy, representation, justice, and constitutional design, have often been defined in relation to a preoccupation with racial and colonial forms of domination. During the colonial era, a few African thinkers, notably Edward Wilmot Blyden, Joseph Ephraim Casely Hayford, and Leopold Sedar Senghor, interpreted Africa for intellectuals throughout the world. Many other thinkers of analytical or philosophical merit were scarcely noted by intellectuals outside of their own countries and neighboring lands where they lived and worked. Most of those locally significant thinkers have now disappeared from the recorded history of ideas. So it is that the discovery and elucidation of modern social and political thought in Africa poses a formidable challenge to scholars in the field of intellectual history..At the outset of the twenty-first century, new thinkers have begun to revisit the intellectual history of Africas quest for freedom, liberty, and social progress. For that purpose, they can find reliable guidance in the pages of this masterful work.

ABOUT THE AUTHOR
ROBERT JULY is professor emeritus of History at Hunter College and Graduate School of the City University of New York. He had previously taught at the University of Ibadan and Kenyatta University. He is also the author of Precolonial Africa and A History of the African People.