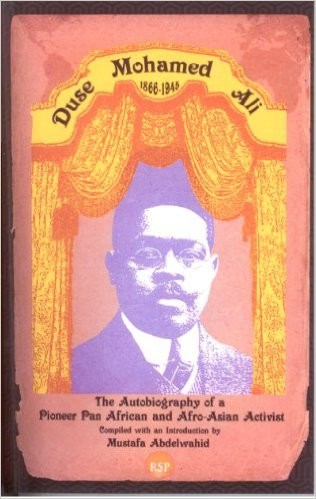 Duse Mohamed Ali was born in Alexandria, Egypt, to an Egyptian father and a Sudanese Mother. He attended King s College of London. In 1885 at age of nineteen, he started a career as a stage actor that lasted for twenty-four years. He was also in the company of Herbert Beerbohm Tree and in Mrs. Langtry's Antony and Cleopatra production, at the Royal Princess Theatre, London. Mr. Ali also toured England, Ireland and Scotland. He produced Othello and The Merchant of Venice at Hull, Yorkshire in 1902, playing the parts of Othello and the Prince of Morocco, and winning the plaudits of the British Press. Among his credits as a playwright are The Jews Revenge produced at the Royal Surrey Theatre in London, in 1903; A Cleopatra Night at Dundee in 1907; and the Lily of Bermuda, a musical comedy which he produced at Theatre Royal, Manchester, in 1909. Every production of his received the enthusiastic welcome of the British and American Press, but perhaps the most outstanding of his productions and performances was A Daughter of Judah at the Empire Theatre, Glasgow, in 1906. Reviewing the production, the London Daily Telegraph wrote: "Duse Mohamed is an actor of outstanding merit." He also produced many plays in America where he won fame as an actor. He founded the Hull Shakespeare Society of which Sir Henry Irving was the first President and the Anglo-Ottoman Society, London which included Lords Newton, Lamington, Stourton and Mowbray. He founded and was Secretary of the Indian Moslem Soldiers' Widows' and Orphans' War Fund, in 1915, and among the patrons were Consuelo, the Duchess of Marlborough, the Right Hon. D. Lloyd George, Sir Edward Grey, Lord and Lady Lamington, Lord and Lady Newton, the Marquis and Marchioness of Crew, Mrs. H.H. Asquith, Sir Austen and Lady Chamberlain, Lord Curzon, and almost all the members, of the British Cabinet. In 1909 he began a new career in journalism, publishing articles on Egyptian nationalism and the oppression of Africa in New Age, an influential socialist weekly literary journal. In 1911 he published a short history of Egypt, In the Land of the Pharaohs, reputedly the first history of that country written by an Egyptian in English. The book received critical acclaim, catapulting him into international prominence. In 1912 in London, he founded the African Times and Orient Review, a political, cultural, and commercial journal that advocated pan-African-Asian nationalism and was a forum for African intellectuals and activists from all over the world. In 1921 Duse travelled to the United States where he briefly worked for Garvey s Universal Negro Improvement Association (UNIA), contributing articles on African issues to Negro World and heading a department of African Affairs. In 1931 he left the United States for West Africa, settling in Lagos, Nigeria. He founded and became the editor of The Comet, which in 1933 became Nigeria s largest weekly. He died in Lagos in 1945.

Mustafa Abdelwahid received his B. A. degree in Political Science/Global Affairs and International Development from University of North Carolina, the LLM in International Law from Baku State University, the MLIS degree in Library and Information Science from University of Wisconsin, and the PhD degree in Political Science from Auburn University in Alabama. Dr. Abdelwahid has presented papers at many conferences on Islam and politics and role of library in developing countries.