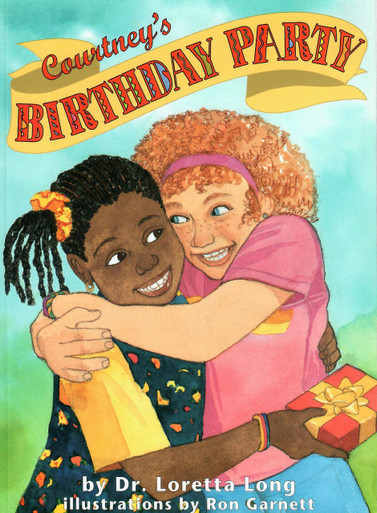 Courtney is very excited. Her seventh birthday is only a few days away and her mother has planned a special party. All of Courtney's classmates will be invited.
Courtney and Diana are best friends. They ride the same school bus; they sit in the same row in class; they love the same snacks. And on Saturday they will be the same age - seven. It has never mattered to them that one is white and one is black. But when Courtney's mom sends the invitations to class, Diana is not included. Both Courtney and Diana are devastated.

ABOUT THE AUTHOR
With energetic prose, actress and educator Dr. Loretta Long tackles a tough subject. In Courtney's Birthday Party she reminds us that prejudice is often learned through the things that are left unsaid. At the same time, she inspires us to see that it is possible for adults to learn valuable lessons from the friendships forged by their children. For more than thirty years, Dr. Loretta Long has entertained and educated early learners in her role as Susan on Sesame Street. She earned a doctorate in education from the University of Massachusetts. This is her first picture book. With his pencil and water color drawings, illustrator Ron Garnett captures Courtney and Diana's story with rare simplicity, sensitivity and style.