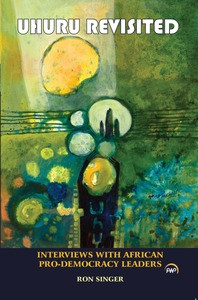 “Uhuru!” (“Freedom!”) was the battle cryof Kenya’s Independence movement.  Since Ghana led the way in 1957, most of the fifty-plus nations of Africa have thrown off their colonial oppressors. But, since then, new oppressors—dictators and other ineffective, venial leaders—have misruled many of these nations.

Based upon a series of in-depth interviews, Uhuru Revisited describes three of sub-Saharan Africa’s endemic problems: economic inequality, corruption, and an un-free press. The book also celebrates the lives of eighteen heroic activists who have grappled with these problems. Today, democratic revolutions are sweeping the globe. Designed for both scholars and general readers, Uhuru Revisited offers a basis for understanding the broad subject of regime change.

“Uhuru Revisited tells the story of a transforming Africa—an Africa that is rarely covered in Western media—from the perspective of African innovators, drivers of change and activists for social justice. It tells a story of the constant tension between resistance against oppression and resistance against change. It will certainly be an invaluable resource in any African Studies program, but it is also an enriching read for anyone who is interested in the developments in Africa.”

—Zakes Mda, Professor of English, Ohio University and award-winning South African novelist, poet and playwright; author of Ways of Dying (1995), The Heart of Redness (2000), and The Sculptors of Mapungubwe (2013).

“The African continent has a myriad of faces. Ron Singer portrays some of them in a fascinating collection of encounters. Through his conversations he illustrates social realities but also hopes and visions, as well as disappointments among those engaged in manifold social struggles. The original exchanges date back to a time when the continent was full of pioneering aspirations in the mid-1960s. These are contrasted with a “reality check” more than half a century later. The documented personal interactions, guided by empathy but free from paternalism, are a rich source. They give voice to those who have something to say.”

—Henning Melber, Director emeritus of The Dag Hammarskjöld Foundation in Uppsala/Sweden and Extraordinary Professor at the Department of Political Sciences/University of Pretoria and the Centre for Africa Studies/University of the Free State in Bloemfontein, South Africa.

“Africa has seen dramatic political reforms since the 1990s as military dictatorships, single party regimes and racial oligarchies have given way to elected governments and widening space for public voice. The story of democratization and freedom in Africa is entwined with the story of activists and political figures who pressed for change, often at great personal risk, with tenacity and commitment. Ron Singer has captured some of these voices and presents their stories with flair and empathy. Anyone interested in Africa's odyssey, the continent's future, and the global story of democratic development will want to read this book.”

RON SINGER (www.ronsinger.net) was born in The Bronx, New York in 1941. He is the author of seven previous books, as well as hundreds of poems, stories and articles, many of them about Africa. Singer’s interest in the continent began when he was a Peace Corps Volunteer in Nigeria between 1964 and 1967. After obtaining a Ph.D. in English from the University of Chicago in 1976, he taught until 2008. Uhuru Revisited is the product of sojourns in six African countries during 2010 and 2011.