CARNIVAL OF THE OLD COAST, by Lemuel Johnson, HARDCOVER 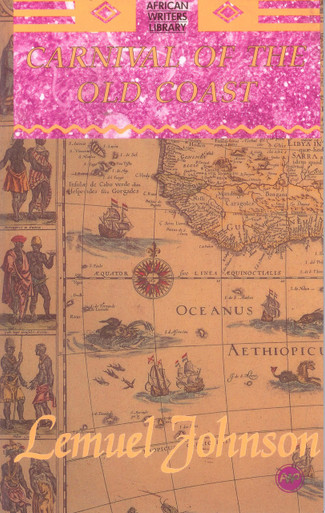 CARNIVAL OF THE OLD COAST, by Lemuel Johnson, HARDCOVER

The concern in Johnson's Sierra Leone Trilogy has been to return to, and re-frame, the years from the 1500s to the 1960s, and to do so by deploying con/texts in the Sierra Leone Krio heritage-- with its remarkably elastic history of scatteration and re-grouping; its canon of anguish that is as much a tale from Shakespeare as it is a bolero for Quasimodo. In brief, Carnival of the Old Caost, Hand on the Navel, and Highlife for Caliban all negotiate, traffic and trade as necessary, into a quite complex cultural genealogy. It is a genealogy that is as much Yoruba as it is Afro-Portuguese; as much Liverpool and Hull as Nova Scotia and Jamaican Maroon. The product, too, of the coast of the Carolinas and of the Gullah islands, this carnival of a Krio identity is here answerable to its ancestry in Afro-Christian shout as it is to the call of the Afro-Islamic Aku Krio mosques of Fourah Bay, in the Eastend of Freetown. The result is "pedigree, with weight" --Hagar and Othello; Arabia Felix and Calypso and Buenos Aires. In Johnson's voice, it produces a strange familiarity-- like "great hatred in a small house" --and a certain "defiance of figures in wood": "Call us Ishmael (if you please) or barrabas/Habibatu or Zenobia. Cain, too./we take a count in figure and in sum,/no matter how hissed as injury into the ear./we barter coinage for coin/and do not sink."