CARNIVAL OF THE OLD COAST, by Lemuel Johnson 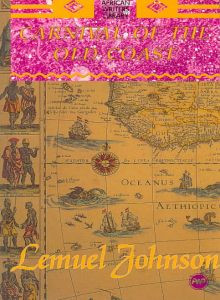 CARNIVAL OF THE OLD COAST, by Lemuel Johnson

The concern in Johnson's Sierra Leone Trilogy has been to return to, and re-frame, the years from the 1500s to the 1960s, and to do so by deploying con/texts in the Sierra Leone Krio heritage-- with its remarkably elastic history of scatteration and re-grouping; its canon of anguish that is as much a tale from Shakespeare as it is a bolero for Quasimodo. In brief, Carnival of the Old Caost, Hand on the Navel, and Highlife for Caliban all negotiate, traffic and trade as necessary, into a quite complex cultural genealogy. It is a genealogy that is as much Yoruba as it is Afro-Portuguese; as much Liverpool and Hull as Nova Scotia and Jamaican Maroon. The product, too, of the coast of the Carolinas and of the Gullah islands, this carnival of a Krio identity is here answerable to its ancestry in Afro-Christian shout as it is to the call of the Afro-Islamic Aku Krio mosques of Fourah Bay, in the Eastend of Freetown. The result is "pedigree, with weight" --Hagar and Othello; Arabia Felix and Calypso and Buenos Aires. In Johnson's voice, it produces a strange familiarity-- like "great hatred in a small house" --and a certain "defiance of figures in wood": "Call us Ishmael (if you please) or barrabas/Habibatu or Zenobia. Cain, too./we take a count in figure and in sum,/no matter how hissed as injury into the ear./we barter coinage for coin/and do not sink."