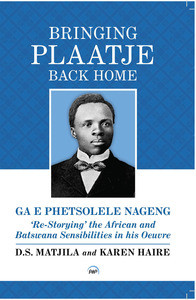 Tribute to South African giant man of letters, Sol T Plaatje (1897-1932), is slowly coming. This work aims to redress an unwitting distortion in the criticism that has painted a portrait of the impeccable English gentleman. This one-dimensional portrait is challenged by the thesis of the book, namely, that while Plaatje wore the outer trappings of Englishness and Westernization, he bore the inner sensibilities of a Motswana and African. Sol T. Plaatje, pioneer black journalist and politician, adopted Western ways of dress, spoke European languages, received a formal Western education, and was a Christian. As we seek to demonstrate in this book, however, his worldview, ideals, character, multilingualism, values and lifework were informed by deep-rootedness in his Setswana and African culture. Constrained to negotiate life as a perpetual subordinate in a world of white dominance, Plaatje turned ‘hybridity’ to his advantage, elevating to equality African people, especially the worker, African language, foregrounding Setswana proverbs and his African culture, highlighting the occupation of cattle-herding, the institution of bogosi (chieftaincy) and cultural values, botho (reciprocity) and boikobo (moderation).

Whereas scholarship has tended to focus on Plaatje’s publications in English, especially Mhudi, the scope is broadened scope to his less well-known English texts and further begins to look at his bilingual Setswana-English and Setswana texts. Not Western texts but Setswana oral literature, proverbs, traditional poetry, and folktales, as well as modern written Setswana literature in the generations following Plaatje, are used as evidence and support of claims. One chapter models analogy as a methodology based on an African worldview. This innovative methodology has implications for the field of African literature with its perennial quest for alternatives to Eurocentric criticism.

Plaatje worked tirelessly to promote the education of his people and there is a great need for him still to be known to ordinary South Africans. This book is intended for the ordinary South African reader and in the international arena for first year tertiary learners as an introductory text to Plaatje in comparative literature, South African literature and even African Studies courses. It might equally appeal to scholars in Africana and Black Studies, adding one more freedom-fighter to the annals of the black people’s struggle across time and space for recognition as human beings and as equals.

D.S. MATJILA is associate professor in the Department of African Languages at UNISA.

KAREN HAIRE, a research fellow at UNISA, South Africa, is an associate professor, Multidisciplinary Faculty at Principia College, USA. They recently collaborated as editors and translators of Lover of His People: A Biography of Sol T. Plaatje by S.M. Molema, a legacy project, requested by the Sol Plaatje Educational Trust, Kimberley, South Africa.