Breaking Down Diplomacy: An Insider’s Guide to the Art of Negotiation by Ambassador Kwabena Osei-Danquah (HB) 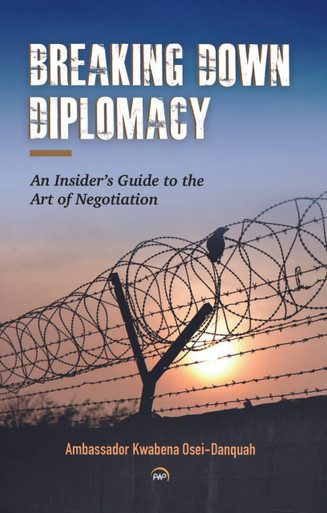 Breaking Down Diplomacy: An Insider’s Guide to the Art of Negotiation by Ambassador Kwabena Osei-Danquah (HB)

The current state of diplomacy, especially multilateral diplomacy, is marked by increasing inability to forge consensus on key global issues, including the existential matter of climate change.

In addition, the changes wrought by technology and the impact of social media, the fraying of the social protection at the heart of the international economic and financial architecture, the need to address economic, wealth and wage inequality and the swift transformation of the world of work and their implications for diplomacy and negotiations require new approaches to the work of diplomats and the way they are trained.

“With careers spanning over 35 years as a foreign service officer and a senior official of the United Nations, during which he participated in development missions to all corners of the world and led negotiations at the UN, Osei-Danquah has managed to distill his experiences and observations into a book that is both a manual and a thorough academic study, but so much accessible by personalizing the key themes with examples.”

“The book provides a manual for aspiring and seasoned diplomats to navigate the ever-expanding and challenging environment of diplomacy. But its usefulness is not limited to diplomats. It will be a useful guide to leaders at all levels in society.”                                   —S. Ebow Quainoo, Ph.D., Professor & Chair, Political Science & Economics, East Stroudsburg University

“We are privileged to have Ambassador Kwabena Osei-Danquah’s insider account as a Ghanaian career diplomat, who has spent several years representing Ghana and in key positions in the UN system. Through his eyes we learn the intricacies of international diplomacy.”

“The compelling examples of real-life negotiations literally sprinkled across Breaking Down Diplomacy … quintessentially reflect the author’s philosophy of diplomacy as a tool for overcoming differences. The genre-breaking style of the book—academic, autobiographical, and philosophical, mixed with storytelling and commentary—reflects the creativity, flexibility, and sensibility that today’s diplomat and other actors require to make our world work better for all who live in it.”

Ambassador Kwabena Osei-Danquah was recently Ambassador At Large for the Republic of Ghana. Over the past year, he has undertaken assignments as Special Envoy of the President of the Republic of Ghana and as the leader of the Operational Support Team for the African Continental Free Trade Area Secretariat. He was the Chef de Cabinet to the President of the 73rd Session of the United Nations General Assembly. He also served as the Director of the Division for Governance and Multilateral Affairs of the United Nations Population Fund (UNFPA), having joined UNFPA in 2002, after working as a diplomat for Ghana for over 17 years. He also served as the Executive Coordinator, International Conference on Population and Development (ICPD) Beyond 2014 Coordinating Secretariat, leading the 20-year global review of the implementation of the Programme of Action of the ICPD and its follow-up Beyond 2014.