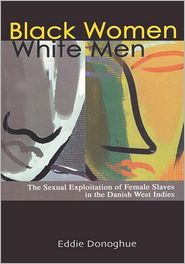 Using archival material and other existing sources, this book graphically documents the sexual exploitation of female slaves in holding pens on the West Coast of Africa, on slave ships during the Trans-Atlantic crossing, and on plantations in the Danish West Indies, now known as the United States Virgin Islands. In this book,

Donoghue successfully demonstrates how under the Danish Slave Codes it was impossible to rape a slave. He notes that if a female slave died during her resistance to the sexual advances of any master, her owner was entitled to compensation by law. The author further notes that the diminishing slave population near the end of the eighteenth century triggered the development of a comprehensive plan for the breeding of slaves in the Danish West Indian colony. The blueprints included the granting of generous loans to planters to import female slave of childbearing age. Also, every black female slave who bore her master a healthy child was rewarded monetarily. Although it is true that some slave welcomed sexual liaisons with their white masters and served as concubines or "housekeepers", the book provides compelling evidence that many resisted by resorting to abortion, infanticide, poisoning, marronage and suicide.

Fully indexed with extensive notes and an invaluable bibliography, the book successfully chronicles a relatively unexplored dimension of slavery in the Danish west Indies.

Eddie Donoghue was born on the small island of Montserrat in the Caribbean and lived for almost twenty years in Sweden. He holds a Ph.D. in Sociology from the University of Gothenburg, Sweden, and is currently the Chief Researcher for the Legislature in the United States Virgin Islands.