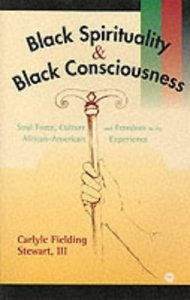 Contrary to some misguided perceptions about the religion of black folk, African-American Spirituality plays a vital role in the formation and practice of black freedom in American. While social and political freedom are important quests in the African-American experience of freedom, black Americans have managed to created a unique experience of freedom that embraces black spirituality and black culture as essential elements for building personal identity consolidating community and determining their destiny. This freedom has also created a unique cultural archive of the black culture soul which shapes the consciousness and values of black Americans as a people of God of inherent worth and power who have surmounted the relentless storms of adversity.

Black spirituality affirms, negates and transcends aspects of Anglo-American culture, creates and sustains African-American culture and establishes psychological and spiritual relocation in response to oppression and various systems of devaluation in American society.

A central thesis of this book is that African-American spirituality, by the way it shapes, informs and strengthens black life, creates a unique matrix of freedom that accentuates the power, resiliency and creativity of black people as the means of overcoming their plight. At the heart of this paradigm of freedom is the courage to create and construct a positive reality which has enabled Africans to develop a spiritual gift of resourcefulness that compels to identify, define, confront and transform those forces of evil and oppression that have instigated their demise.

Thus the creation of a culture of spirituality and a spirituality of culture through creative and resistant soul force. And cultural creativity has aided the sanity, survival and well-being that has also contributed to a practice of freedom emulated in the world community.

Carlyle Fielding Stewart, III is Senior Pastor of Hope United Methodist Church in Southfield, Michigan. Dr. Stewart is a teacher, scholar and lecturer. He has published over 50 articles in journals and newspapers, and is the author of seven books, including, Sankofa: Celebrations for the African American Church and Soul Survivors: An African American Spirituality.