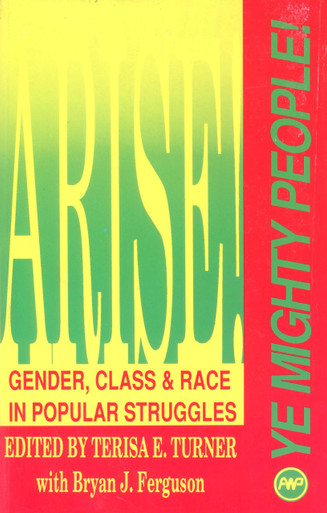 Arise Ye Mighty People! is about the new world society emerging fromt he disarray of the old. This collection documents expressions of the new society from Nigeria's oil belt, North America's urban insurgents, the Middle East's intifada, the Caribbean's Rastafari, and Kenya's Mau Mau, ecology and democracy movements. Arise! emphasizes the growing force of women within social movements. It is about Caribbean revolutionaries including Bob Marley and CLR James who invoked and documented uprisings of the people, and in so doing, strengthening the new cycle of working class struggles emerging in the late twentieth century. Arise! identifies a growing internationalism of grassroots people who are appropriating global media and markets to unite across gender, race, ethnic and national divides.

"Throughout this century, especially during the last half of it, there has been continuous resistance and struggle on the part of most of the people of the world. The resistance and struggle are dynamite blasting to rubble the interlocking struggles of multiple oppressions leveled predominantly against women and men of color everywhere in the world, in Africa, Asia, North South Americas, and in the islands of the seas. Arise Ye Mighty People! witnesses these struggles. It, moreover, witnesses the popular expressions, ideology and culture of resistance. This anthology is a stellar achievement." -Calvin C. Hernton, Author of The Sexual Mountain and Black Women Writers

ABOUT THE AUTHOR
TERISA E. TURNER is a Canadian politician economist who has worked in Europe, the USA, West and East Africa, the Middle East, and the Caribbean. her writings include Oil and Class Struggle: Mau Mau Women, Their Mothers, Their Daughters, and articleson petroleum, resource conflict, international political economy, gender and the environment. She has served as a resource person for progressive governments, unions, liberation organizations and networks on energy policies. She lectures in political studies, sociology and anthropology at the University of Guelph in Ontario, Canada.