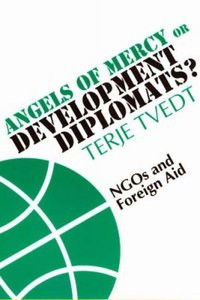 Non-Governmental Organizations (NGOs) have become central to the administration of foreign aid during the last two decades. Under Clinton the NGO share of USAID went up from 13% to 50%. The funds transferred by northern NGOs have increased at twice the rate for international aid as a whole.

This book analyses and questions this great change:

-Do NGOs provide a convenient excuse for spending cuts? or are NGOs genuinely better at spending the budgets than government agencies?

-Is the relationship between states and societies being changed, even in remote rural corners of the world?

-And what about NGO staff? Are they angels of mercy, government-paid development diplomats, propagandists for a triumphant West or instruments in a coming clash between civilizations?

The cases of Zimbabwe, Ethiopia, Eritrea, Sudan, Bangladesh and Nicaragua shed light on questions such as these. They provide evidence so that debates can be better informed and less influenced by political rhetoric and untenable myths about NGO achievements.