AMY ASHWOOD GARVEY: Pan-Africanist, Feminist and Mrs. Marcus Garvey No. 1 or, A Tale of Two Amies ,by Tony Martin 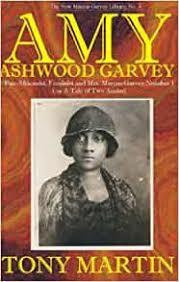 AMY ASHWOOD GARVEY: Pan-Africanist, Feminist and Mrs. Marcus Garvey No. 1 or, A Tale of Two Amies ,by Tony Martin

Tony Martin, the distinguished professor of African American and Caribbean history at Wellesley College is determined to rescue Amy Ashwood Garvey from obscurity, and place her not only in the forefront of the Marcus Garvey pantheon, but also in the feminist and Pan-African movements of the twentieth century. His book, Amy Ashwood Garvey: Pan-Africanist, Feminist, and Mrs. Marcus Garvey No. 1, Or, A Tale of Two Amies is, indeed, a marvel of scholarship. He tells us that he worked on this book for some twenty-seven years, and it shows. The number of references alone is enough to inspire awe.

Martin has done everything and has been everywhere, in the quest to present Amy Ashwood Garvey as a real person, bereft of any unnecessary sociological or psychological encrustations. In doing so, Martin also presents facts and insights on the life of Marcus Garvey hitherto unknown. Professor Martin appears determined to keep the Garveys in front of us for as long as he lives (he has given us eight very good books already). [In "this richly researched and deeply-delved book,"] Professor Martin has brought to life, and in such fine detail, a charismatic and driven woman who not many would emulate, but most likely would appreciate.