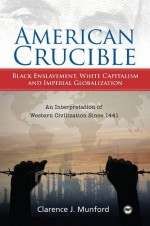 This work centers on philosophy of history and political economy. Globalization is writ large. Civilizational historicism is a worldview which affirms the reality of social laws. It is an explanatory model which highlights political economy. The eradication of white supremacy globally would enable real emancipation for the black world and parity for African Americans. Civilizational historicism posits race, instead of class, religion or culture, as the key historical construct. Race is conceived as a historical artifact, not a biological hypothesis. Race is a made-in-America potency which determines how African Americans are treated. From the holocaust of black enslavement sprang the oppressive racial interdependence between blacks and whites, past and present. The staged incremental progress African Americans are alleged to have benefited from is, in fact, a contingency-rooted, episodic modernization of second-class citizenship, the kernel of which has remained stable, despite civil rights concessions.

Munford has done it again—a brilliantly original foray into global history! In an exhaustive overview he tracks human development from early Homo Sapiens to the present, targeting Africa’s history of prosperity and creativity, followed by centuries of devastating colonialism. Examining the 400-year-war of Europeans versus Africans (inaccurately known as “slave trade”), Munford chronicles the decimation of Africa and theft of its youth to create founding wealth for western capitalism. What is naively viewed as a democratic multiracial America is shown as intentional illusion, a façade lying over white-on-black oppression still central to white privilege and power. Using a distinctive “civilizational historicism” approach, Munford contributes well to the critical racial paradigm emerging on the edge of social science that seeks to liberate all, and especially African-descent people, from continuing white-maintained oppression termed “world history.” In the process, he offers deep lessons into what a fully liberated human world could be
— Joe R. Feagin
Ella C. McFadden Professor of Liberal Arts, Texas A & M University
Author, Systemic Racism: A Theory of Oppression

Prof. Munford’s American Crucible is WEB DuBois’ Black Reconstruction for our times. Like Black Reconstruction, it breaks new intellectual grounds while exposing the two-headed monster that commands not only the US, but the world: Capitalism and Racism. American Crucible ultimately shows us that the world cannot be straightened out without dealing with this two-headed monster that has set the civilizational norm for the world’s people. And it is this rebirth of Black Genius that Munford so passionately calls forth that will be a central force slaying this monster of dehumanizing greed, depravity and antiNature.
—S. E. Anderson
Author, Black Holocaust for Beginners (Writers and Readers)
Adjunct Professor at Brooklyn College School of Education Brooklyn, NY

ABOUT THE AUTHOR
Clarence J. Munford is Professor Emeritus of History at the University of Guelph, and a specialist in Black Studies. He is is an African American scholar whose teaching career since 1959 has included universities in Africa, Europe, the United States and Canada. In 1991 The Mellen Press published his Black Ordeal, a study of early black enslavement in the Caribbean, in three volumes. He was the recipient of the African Heritage Studies Association Book Award in 1997 and 2002. Munford’s works were the subject of comprehensive analysis in Volume 34, No. 3 of the journal Black Scholar. His efforts in this century’s first decade include the Eminent Speakers’ Series address, “Race, Reparations and the Future of the Black World,” March 21, 2002, Dalhousie University, Halifax, Nova Scotia, Canada.