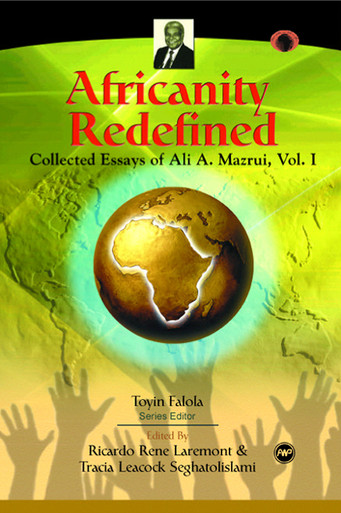 Africanity Redefined: Collected Essays of Ali A. Mazrui, Volume I is the first of three volumes of Ali A. Mazrui's most important essays. The eventual three-volume work will provide readers with a broad spectrum of Professor Mazrui's writings during his four decades as a scholar and public intellectual. This first volume redefines the meaning of Africanity across geographical spaces, time, and cultures. The resulting definition is dynamic. It forces us to reject neo-imperialist paradigms and ontologies of what it means to be African. By encouraging us to think about Africanity as an idea rather than as point of origin, the ideas contained in these essays force us to reposition ourselves in the debate of our place in global cultures and civilizations, and they prepare us to take a more active role in social and political affairs.

Ali A. Mazrui is the Director of the Institute of Global Cultural Studies and the Albert Schweitzer Professor in the Humanities at SUNY-Binghamton. He also served as the past president of the African Studies Association. He has authored over twenty books, including The African Condition, Nationalism, and New States in Africa (with Michael Tidy); and more recently, The Power of Babel: Language and Governance in the African Experience (with Alamin M. Mazrui). He is also the creator and author of the critically acclaimed PBS/BBC television series The Africans: A Triple Heritage and its companion book.

ABOUT THE EDITORS:
TOYIN FALOLA is the Frances Higginbothom Nalle Centennial Professor of History at the University of Texas at Austin. He is the editor of the Journal of African Economic History, as well as the series editor of Rochester Studies in African History and the Diaspora. A leading Africanist, he is the author of many books including Yoruba Gurus: Indigenous Production of Knowledge in Africa and editor of Tradition and Change in Africa: The Essays of J. F. Ade. Ajayi (both by AWP, 2000).

RICARDO RENE LAREMONT is the Associate Director of the Institute of Global Cultural Studies and has joint faculty appointments in the Sociology, Political Science, & Africana Studies Departments at the State University of New York at Binghamton. His work focuses on the comparative politics of Africa, Latin America, and Europe. His publications include Islam and the Politics of Resistance in Algeria, 1783-1992, The Causes of War and the Consequences of Peacekeeping in Africa, and a forthcoming book, Borders, Battles, and Blood: Colonial Boundaries, Warfare, and the New Nationalisms in Africa.

TRACIA LEACOCK SEGHATOLISLAMI is completing her Ph.D. in Persian and Islamic Literatures at Binghamton University, SUNY. She is also a freelance writer, editor, and translator.