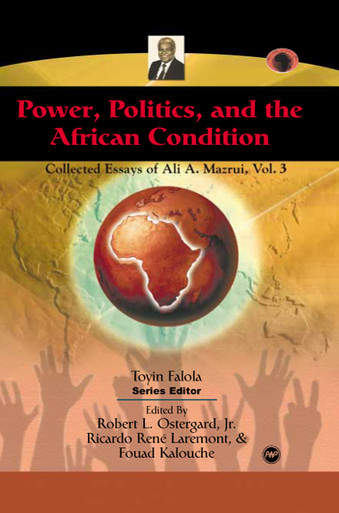 "Power, Politics, and the African Condition" is the third volume of The Collected Essays of Ali A. Mazrui, which will provide readers with a broad spectrum of Ali. A. Mazrui’s scholarly writings. The third volume is centered on issues of power and politics at the nexus of Africa’s domestic affairs and its international concepts about the disequilibrium of power in the international system and the problems that Africa has confronted globally because of it. Mazrui focuses the reader’s attention on the impact that the colonial legacy and African tradition had on state formation, leadership, Africa’s political economy, violence, and conflict resolution while presenting some of his most interesting and even controversial ideas for building “Pax Africana.” Spanning nearly forty years, Mazrui’s essays are classic and contemporary statements on the diagnosis and treatment of what he called “The African Condition.”

ABOUT THE EDITORS
ROBERT L. OSTERGARD, JR. is Associate Director of the Institute of Global Cultural Studies, Assistant Professor of Political Science and Africana Studies, and research fellow at the Center on Democratic Performance, Binghamton University, State University of New York. He is the author of "The Development Dilemma: The Political Economy of Intellectual Property Rights in the International System," and numerous articles for journals and edited books.

RICARDO RENE LAREMONT is Chair of the Sociology Department and Associate Professor of Sociology, Political Science and Africana Studies at Binghamton University, State University of New York. He is the author of "Islam and the Politics of Resistance in Algeria, 1783-1992," and the editor of "The Causes of War and the Consequences of Peacekeeping in Africa."

FOUAD KALOUCHE is Research Associate at the Institue of Global Cultural Studies at Binghamton University, State University of New York where he received his Ph.D. in Philosophy. His dissertation was entitled "Ethics of Destruction: The Path Toward Multiplicity" (2001).