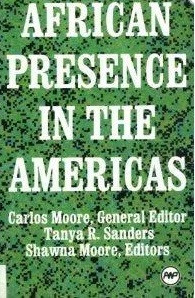 This book is comprised of the proceedings of the First and Only Conference on Negritude ever held in the Americas. The Conference which gathered intellectuals of African descent from various countries of the new continent was held in Miami in 1987 around the theme "Negritude, Ethnicity and Afro Cultures in the Americas"

The towering presence of Aimé Césaire and Léopold Sédar Senghor, side by side on a public forum for the first and, most likely, the last time since The First World Festival of Negro Arts, hosted by Senegal in 1966, bestowed a solemn summit quality on this impressive gathering. The untimely death of Cheikh Anta Diop, the scientist, Alioune Diop, the strategist, Léon Damas, the uncompromisinlgy anti-colonialist writer deprived the Conference participants of their physical presence, but their spirit hovered over the entire city during these memorable three days. Since the conference, death also robbed the Black World of the brilliant minds of Leila Gonzalez, St. Clair Drake and Alex Haley who participated.

Men of letters and political pioneers, Césaire and Senghor have ineradicably marked world history. At the close of this millenium, their incomparable intellectual contribution has come to symbolize the divergent continuity of the two powerful currents of thought launched, at the beginning of this century by Booker T. Washington, Ida B. Wells, W.E.B. DuBois, Marcus Garvey, Jean Price Mars, Anténor Firmin (and many less known African men and women thinkers) in what some have termed the Great Debate.

Carlos Moore Wedderbun, Ph.D. was born in Cuba of Jamaican-Barbadian immigrant, working-class parents. He left Cuba in 1963 into exile. An ethnologist and political scientist, he holds two doctoral degrees from the University of Paris-7 9France). Dr. Moore has lived and worked in Africa for seven years (egypt, Nigeria, Senegal), and for ten in France. His journalistic career involved working for Agence France Presse and Jeune Afrique.

He is the author of Castro, The Blacks and Africa (CAAS/UCLA '89) and This Bitch of a Life (Alison, Busby and Karthala, '82), the biography of Fela Anikulapo-Kuti.

Dr. Tanya Saunders is currently the director of International Programs at Ithaca College, N.Y. She coordinated the logistics for the Conference on "Negritude, Ethnicity and Afro Cultures in the Americas."

Ms. Shawna M. Moore is the author of Garvey, Lumumba, Malcolm: Black Nationalist Separatists (Third World Press '72). She is currently a professor of English at the AMEP Lycee of Fort de France, Martinique