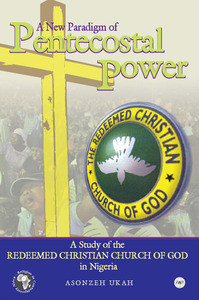 Sub-Saharan Africa appears to be the theatre where a remarkably sophisticated and complex drama of socio-cultural change is playing out. Nowhere is this social transformation more evident than in the cities and towns of Nigeria. In this country of more than 130 million inhabitants, religion—in its varied forms—has taken over urban landscapes, political discourse, the airwaves of radio and television broadcasting, economic and educational practices and policies as well as social interaction. Pentecostalism, in its latest incarnation(s), is one of the principal driving forces of this phenomenon.

This book describes with great historical and sociological incisiveness, one of the prime movers of this transformation, the Redeemed Christian Church of God (RCCG). This Church is arguably the most popular and fastest growing Pentecostal Church in Africa, with more than 10,000 congregations in more than 80 countries around the world. A New Paradigm of Pentecostal Power: A Study of the Redeemed Christian Church of God in Nigeria documents the multiple processes of change in this Church. Focusing on the history, growth, doctrinal and ritual transformations of the RCCG, the book chronicles the contours of religious change taking place in contemporary Nigeria; it presents a case study that deals with Pentecostalism in Nigeria and relates it to the wider social, political and economic transformations taking place in the world. It is a major contribution to the on-going discourses on religious and cultural processes of globalization as they are unfolding in contemporary Africa. This book illustrates from a sociological perspective the patterns of transformation of religion in Africa and how churches refashion themselves in order to remain appealing and attractive to a broad spectrum of individuals, groups and corporate entities in Africa.

…No one interested in African politics or development can afford to neglect the influence of religious beliefs and practices, and the leaders and organizations which express and promote them. It is because it does so much to illuminate these relationships that Dr Ukah’s book deserves the widest readership.
— J. D. Y. Peel
From the Foreword

ABOUT THE AUTHOR
Asonzeh Ukah holds a Ph.D. in History of Religions from the University of Bayreuth, Germany, where he is currently a lecturer and Research Fellow. Dr. Ukah is a member of a team of researchers at the institution working on a project titled “Tradition and Innovation: Old and New Churches in the Religious Market of South Africa”.