A BLIGHTED HARVEST: The World Bank and African Agriculture in the 1980s, by Peter Gibbon, Kjell J. Havnevik and Kenneth Hermele, HARDCOVER 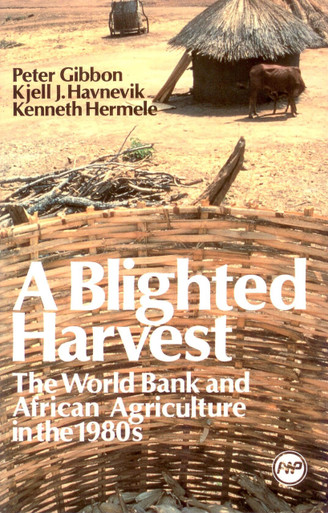 A BLIGHTED HARVEST: The World Bank and African Agriculture in the 1980s, by Peter Gibbon, Kjell J. Havnevik and Kenneth Hermele, HARDCOVER

The authors use the World Bank's own information on agricultural and agrarian development to crticise the realities of the Bank's record during the 1980s. They focus on the social and political results of these policies. 'Aid co-ordination' was brought in during the early '80s by the United States with the help of Britain, Germany and Canada. Recipient countries then met a unified front, directed by the IMF and supported by the World Bank. The World Bank developed programmes of structural adjustment; the rewards attached to conformity were substantial.

The Scandinavian countries also changed their policies. A statement issued from a meeting in Lusaka in 1984 maintained that the state-led strategies were bound to fail, that price incentives should be strengthened and that the Scandinavian preferences for family agriculture should be emulated.

The authors study the effects of agricultural adjustment in six countries. Ghana, Kenya and Zambia have had some years' experience of adjustment while Mozambique, Uganda and Tanzania only adopted the policy in 1986-87. They were important recipients of Scandinavian aid with the exception of Ghana. The authors use these studies to work towards a more realistic model of African rural society.

This book provides a concise introduction to the subject. There is a growing literature on structural adjustment. However, surprisingly little is on agricultural adjustment. So this book will be of value to students as well as government officials, members of international organization and NGO's.