POLITICS AND SOCIETY IN NIGERIA'S MIDDLE BELT: Borgu and the Emergence of a Political Identity, by Julius O. Adekunle 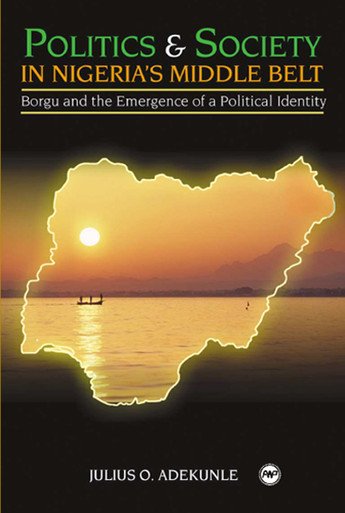 POLITICS AND SOCIETY IN NIGERIA'S MIDDLE BELT: Borgu and the Emergence of a Political Identity, by Julius O. Adekunle

The European partition of Africa at the end of the nineteenth century produced enduring geo-political changes. Some ethnic groups were permanently separated into different political formations and Borgu constituted one of the affected areas. The British and the French divided Borgu between themselves following the race for Nikki in 1894 and the Anglo-French Agreement in 1898.

Politics and Society in Nigerias Middle Belt provides a basic understanding of the economic, political, and social history of the part of Borgu formerly controlled by the British, but now referred to as the Nigerian Borgu. The book focuses primarily on the emergence of a political identity, carefully examining the role of the Wasangari as dynastic founders. As a result of the flourishing commerce during the early nineteenth century, Nikki princes revived the tradition of establishing dynasties when they carved out chiefdoms in southern Borgu.

Given the paucity of published work on this region, this groundbreaking book is the first to examine the history of Nigerian Borgu from earliest times to the nineteenth century. It discusses the contributions of the Wangara to the economic growth of Borgu, the various pressures that Borgu experienced, and concludes with Borgu relations with the Yoruba people in the nineteenth century.

ABOUT THE AUTHOR
JULIUS O. ADEKUNLE is an associate professor of history at Monmouth University, West Long Branch, New Jersey. He has published many articles on Borgu and several essays on African political and social history.