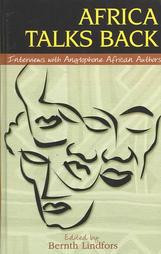 The twenty-eight interviews collected in this edited volume were conducted between 1969 and 1986 in various parts of Africa, Europe and the United States. In the volume, leading writers from Nigeria, Ghana, Kenya, Uganda, Sudan, Malawi and South Africa speak out candidly about significant literary developments in the African continent.

BERNTH LINDFORS is a Professor of English and African Literatures at The University of Texas at Austin and has published more than forty books on written and oral African literatures, the most recent being Africans on Stage: Studies in Ethnological Show Business (1999), Black African Literature in English, 1992-1996 (2000), Multiculturalism and Hybridity in African Literatures (co-edited with Hal Wylie, AWP, 2000), and The Writer as Activist: South Asian Perspectives on Ngugi wa Thiong’o (coedited with Bala Kothandaraman, AWP, 2001).