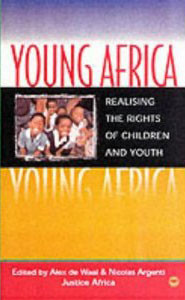 In Africa, children and young people face crisis. Child death rates are rising, and educational enrolment is falling. Children are victims in every war. Millions of young Africans are contracting HIV and AIDS. Neglected by society, Africa’s youth are attracted to militarism and militant religion.

Young Africa pioneers new thinking on the rights of children and young people in Africa and offers new approaches to tackling the violation of the rights of young Africans. This book argues:

·        We must take child rights seriously. The United Nations Convention on the Rights of the Child lays down fundamental legal obligations on governments and the international community.

·        Africa’s children are poor. Realistically, it may take a generation to overcome the problems of extreme poverty, ill-health, and illiteracy.

·        Young Africans are creatively remaking their societies. Young people are not just victims; they are seeking ingenious solutions to their marginalization. Africa’s religious vibrancy is led by the young.

·        HIV/AIDS is the number one threat to Africa’s teenagers. A new openness about young people’s sexuality is essential.

·        The world will benefit from investing in Africa’s children. Promoting the health, education, and protection of children is essential for development, peace, and security.

Young Africa provides a new framework for approaching the entirety of child rights with far-reaching implications for policies.

Alex de Waal is a writer and an activist, who is concerned primarily with war, famine, and human rights in northeastern Africa. He is the Director of Justice Africa, a London-based organization which helps African organizations promote democracy and human rights.

Nicolas Argentiis a research fellow at the Centre for the Anthropology of Children and Child Development, Brunel University, London.