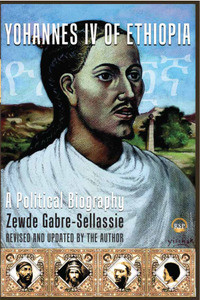 “Although no less illustrious, the Emperor Yohannes IV has been nonetheless featured far less prominently than both his predecessor (Tewodros II) and successor (Menelik II). This prodigiously researched, rigorously empirical, and analytically balanced biography resurrects him from relative obscurity. The book covers a staggering array of personalities, issues and events, often peppered with fascinating vignettes that poignantly illuminate the life and times of one of the most redoubtable and patriotic rulers of early modern Ethiopia.”

—Prof. Gebru Tareke, Author, The Ethiopian Revolution: War in the Horn of Africa

“I have followed the scholarly achievements of His Excellency Dejazmach Dr. Zewede Gabre-Sellassie since my first meeting with him in person in Oxford England in the early 60's. Although I have been told that he came from a royal aristocratic family, the person I met was but an aristocrat of scholarship.  The present work is a fruit of a most thoroughly researched, well documented, and well written account of one of the most important modern Ethiopian Emperors, Yohannes IV (1872-1889.) Dej. Dr Zewede, was not only a scion of the Emperor himself but he has also researched every detail about the Emperor closely. More importantly Dej. Dr. Zewede was in his own right a first-rate scholar with impeccable knowledge of the language, literature, and history of Ethiopia. This magnum opus is a must read for anyone who wants to understand the modern complicated political and international history of the great Ethiopian nation and its tall stature and dignity among the nations of Africa and the world.”

Zewede Gabre-Sellassie, was a renowned Ethiopian politician, diplomat, and highly regarded historian of Ethiopia in the context of world history. This is the revised and totally re-written edition of his first book on the same subject.