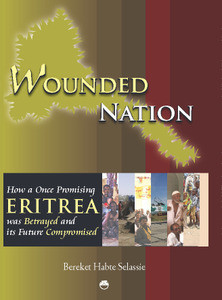 This volume takes up the life story of the author from where the first volume culminated. Through historical and political analyses the author lays bare the hidden (and not so hidden) elements that have contributed to Eritrea’s descent from a stellar model of democracy and progress to a tragic abyss of dictatorship and isolation. The narrative is at once a historical and biographical testament of a man who had been part of the freedom fight as well as of a process of constitution making that had earned the admiration of a wide variety of observers and commentators. Combined together with the first volume, The Crown and the Pen the book is a must read for students of the history and politics of Eritrea and the Horn of Africa region. The title itself is an indication of the central theme of the book providing a clue of the basis for Eritrea’s current predicament. Trust is a fundamental ingredient in human relations. People place trust in the government they elect expecting it to perform its duties according to the promises it makes and pursuant to the law. But promises and laws are frequently broken, which raises the issue of responsibility. That is why there are legal and constitutional requirements for accountability and transparency.

The book’s title and subtitle are indicative of the bitter disappointment of the Eritrean public whose government of former freedom fighters broke its promises. A ratified constitution has been shelved and frozen for over thirteen years and the country has been governed by one-man dictatorship contrary to all expectations, both domestic and international. In 1998, the country went through a devastating war with Ethiopia that took the lives of some one hundred thousand people. The two countries have yet to restore normal relations over a decade later. In Eritrea’s case, the situation of “no-peace-no-war” has subjected hundreds of thousands of youth to an endless forced military service. This has led to a mass exodus of scores of thousands of them defecting to neighboring countries. This condition, together with the general dissatisfaction of the public has raised serious questions about the country’s future. This is one of the various salient issues discussed in this volume.

“The second volume of Bereket Selassie’s unforgettable memoirs, Wounded Nation, is an outstanding analysis of the descent of Eritrea into personal rule and dictatorship. This beautiful land along the Red Sea is aptly described as a wounded nation, for its once promising quest for freedom, lasting peace and material prosperity has been betrayed by the denial of democratic rights and liberties, the destruction of constitutional government, and the lack of an aggressive pursuit of regional integration and development in the Horn of Africa through pan-African solidarity. Those who have read the first volume of these memoirs will continue to enjoy this rich narrative and the superb manner in which the author conveys it in writing. New readers have much to learn about Eritrea and postcolonial Africa.”
—Georges Nzongola-Ntalaja
Professor of African Studies
University of North Carolina at Chapel Hill

“Wounded Nation by Bereket Habte Selassie is a gripping and troubling account of post-liberation politics in Eritrea. The book is both a personal memoir and an analysis of how a country’s fate and future can be put into serious jeopardy by actions of a single individual or a group of a few people. Volume 1 of Bereket’s memoirs traced his life up to the time of Eritrea’s liberation in 1991 and the euphoria of independence after thirty years of independence war. Bereket who himself had been part of the liberation movement became Chair of the Constitutional Commission charged with the responsibility of writing a constitution for the newly liberated nation. Less than a decade after liberation, and only a few years after the adoption of the constitution, the promise of liberation and democracy had been thoroughly betrayed by the non-implementation of the Constitution, and the centralization of power in the hands of President Isaias Afwerki and a few of his collaborators in the Eritrean Peoples Liberation Front (EPLF). Bereket’s honest account of how he, along most Eritreans, trusted the liberation leaders and were not vigilant enough when the dictatorial and authoritarian tendencies of the EPLF leadership were apparent earlier on, is a good lesson for all of us to be always careful not to automatically or prematurely sing the virtues of liberation movements. But the memoirs are not just an account of betrayal and disappointment. They provide a basis for hope in the continuing struggle for democratic governance in Eritrea. Bereket firmly believes that one of the lessons to be gained out of the present crisis in Eritrea is the resilience of the Eritrean people as they struggle through economic decline, social deprivation and political betrayal. Their resilience is demonstrated by the spirit of nationalism which runs through all Eritreans both at home and in the diaspora. Bereket’s memoirs are evidence of that spirit, giving hope to Eritreans wherever they may be.”
—Julius E Nyang’oro
Professor and Chair
African and Afro-American Studies
University of North Carolina at Chapel Hill

"How did one of the most hopeful and admired revolutions of our time—one that included women's equality, children's education and democratic expression through the arts—win a thirty-year struggle against all odds, yet devolve into an anti-democratic one-party regime? This mystery is the subject of Bereket Habte Selassie’s book, Wounded Nation, about post-liberation Eritrea. As the principal author of the country’s constitution, Bereket has special knowledge of the hidden factors that led to war with Ethiopia, Eritrea's former occupier, betrayal of the original promise of democracy and progress, and transforming a once popular revolutionary leader into a despot. For all of us who supported Eritrea’s fight for self-determination—and who support such goals in other countries—this honest appraisal of how things went wrong should be required reading for the saving of hard work, hopes and lives."
—Gloria Steinem
Writer and Feminist Activist

ABOUT THE AUTHOR
BEREKET HABTE SELASSIE is currently the William E. Leuchtenburg Distinguished Professor of African Studies and Professor of Law at the University of North Carolina at Chapel Hill. Prior to this he served as Chairman of the Constitutional Commission of Eritrea between 1994 and1997. In recognition of his tireless work for democracy and human rights, Dr. Bereket was awarded the Honorary Doctor of Laws by Simmons College in May 2009. The internationally renowned jurist, academic and Pan-African activist continues to receive invitations to deliver keynote addresses in various forums in America, Europe and Africa.