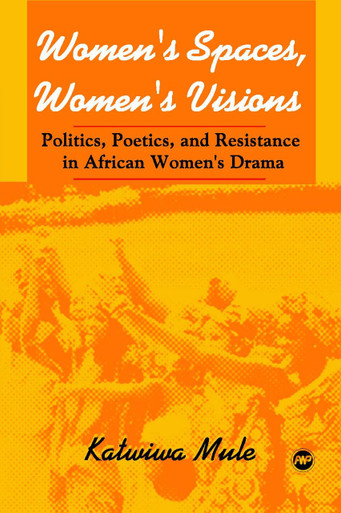 This will be the first book that I am aware of that takes a sustained critical look at the works of African female dramatists across various geographical regions of the continent and deals with plays in more than one language. Examining the works of eleven female dramatists from East, West and South Africa without succumbing to the superficiality of a survey is a commendable achievement of its own. And then to do this with the degree of depth and coherence that is evidenced in the study is a remarkable feat of scholarly research. In this regard, the work is a pioneering text that promises to influence the field in important ways.

The great contribution of this book is in Professor Mules brilliant and careful examination of the ways that colonial histories, post-colonial politics and the theatrical inventiveness of African women dramatists come together to establish gendered performance spaces that reflect the complexities of African womens realities. The meticulous attention paid to both text and context, and the subtlety and originality of the analysis make this book a rewarding one to read. It will have a powerful impact on the fields of African, dramatic and literary studies, and will underscore Professor Mules scholarly importance and influence.

Mule has made a major contribution to the study of African womens drama, especially because the work deals with certain contemporary authors who have not been given significant attention in the African literary canon. An impressive scholarly work, it especially explores the emergence of women dramatists from East Africa, their counterparts in the South, and earlier and contemporary contributions from West Africa. The study effectively blends literary theory and textual analysis.

ABOUT THE AUTHOR
KATWIWA MULE is Associate Professor of Comparative Literature and African Literatures and Co-Director of the African Studies Minor at Smith College, Massachusetts. A Ph.D. in Comparative Literature and a Minor in Womens Studies from the Pennsylvania State University, he teaches various classes on Twentieth-Century Literatures of the Diaspora and African women writers. He was the guest editor for the 2001 issue of Metamorphoses: Journal of the Five College Seminar on Literary Translation which focused on translation in Sub-Saharan Africa.