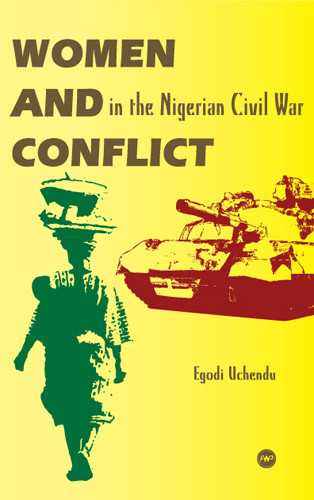 This book, for the first time, provides a detailed analysis of Anioma women war-time roles during the Nigerian civil war, also called the Biafran war. Anioma, the Igbo homeland west of the River Niger, was for long absent in the accounts on the civil war; yet, the Anioma like their Igbo kith and kin east of the River Niger (who led the Biafran revolution and fought the Nigerian federal government from 1967 to 1970) were as involved militarily and otherwise as Biafrans in the confrontation with the federal government all through that period of crisis. In analyzing Anioma women war-time roles, the book draws largely on interviews with women who survived the war, some of whom were adults during the crisis and others who were children at the time. Mens re-collections of womens activities during the war and after were also reflected just as much as relevant information from archival materials from the federal, Anioma, and Biafran sides, both civilian and military.

In addition to the focus on the warwomens responses to the difficulties generated by actual combat, which lasted for a relatively short period in Anioma, the much longer period of military occupation, and the challenges of post-war reconstruction the book provides historical background on pre-war Anioma, delineating the activities of women, their roles, relationships and statuses vis a vis men. The book generally deals with issues that have not been given adequate attention in the academy from that period of Nigeria's troubled history but especially womens participation in the Nigerian or Biafran war, their care taking roles in and outside war zones, shifting identities and the maintenance of cultural and other norms in times of crises.

Uchendu's work is well researched, objectively argued and richly documented. She writes very well and the work is very readable and informative. This book will be a great resource for African historians, Women's Studies scholars, war and peace studies experts and others. It will be of interest to scholars interested in African affairs since the 1960's.

ABOUT THE AUTHOR
EGODI UCHENDU, Ph.D., teaches History at the University of Nigeria, Nsukka. Her research interests and studies have focused on gender and social issues especially as they affect women. Dr. Uchendus writings have appeared in various leading scholarly journals and edited volumes including The Growth of Anioma Cities in "Nigerian Cities" co-edited by Toyin Falola and Steven J. Salm (AWP 2004).