WHITE RACISM ON THE WESTERN URBAN FRONTIER: Dynamics of Race and Class in Dubuque, Iowa (1800-2000), by Mohammad Chaichian 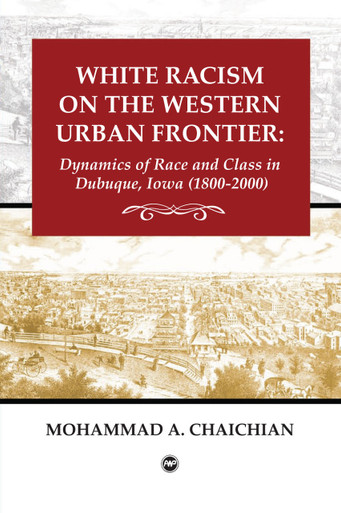 WHITE RACISM ON THE WESTERN URBAN FRONTIER: Dynamics of Race and Class in Dubuque, Iowa (1800-2000), by Mohammad Chaichian

This book examines almost two hundred years of race and ethnic relations and white-on- black racism in Dubuque, Iowas oldest industrial city, in connection with political and economic developments at the local, state, and national levels. Dubuque made the national headlines when there was a sudden eruption of hate crimes during the 1989- 1991 period. Subsequently a group of concerned citizens devised a five-year racial diversity plan to attract one hundred families of color to Dubuque, but failed to achieve their objective due to a lack of community support.

Using a critical political economy approach and based on historical data, the author presents compelling evidence that racist sentiments and discriminatory practice towards blacks tend to escalate during periods of economic downturns, even in cities with little or no minority population. Main topics that are discussed in the book include the evolution of race as a socially created concept, a historical analysis of two centuries of African-Americans` presence in Iowa and Dubuque amidst a persisting whiteon-black racism; the presence of Ku Klux Klan in Dubuque, the relationship between the organized labor and black workers in Iowa, and Dubuque residents` determination to envision plans to fight back and promote racial diversity. Although the author acknowledges that economic conditions and ensuing race relations for each urban community are historically specific, in this book he also makes the case that Dubuques race relations history can be used as an example of any town USA in search of solutions to fight white-on-black racism and discrimination in urban settings with little or no racial diversity.

"A long history of Klan-type activity. Intensely antiblack attitudes and discrimination by whites for more than sixteen decades. Recent attempts to diversify and counter racism mostly fail. This savvy sociological story is not about the South, but the midwestern heartland. In a well-researched analysis probing race and class, Chaichian finds racism to be pervasive and institutionalized in Dubuque, Iowa, where few Blacks have ever lived. The central lesson from the data is instructive and chilling: Racial oppression is as American as rolling farmlands, family values, and apple pie."

"This book makes a singular contribution to our understanding of the role of racism in metropolitan areas with small minority populations, in particular in the Midwestthat place that, to borrow from William Gass, can be aptly viewed as the heart of the heart of the country. Given that most research on racism focuses on major cities with large minority concentrations, White Racism on the Western Urban Frontier begins to fill a lacuna in our understanding of race relations in other types of locales. Chaichian does so by offering readers a finely grained historical analysis of the dialectical relationship between local culture and the national racial climate, combined with an inquiry into the impact of the shifting dictates of capitalism on a medium-sized industrial center. Located on the Mississippi River, Dubuque Iowa can be read as a microcosm of similar communities in the region and beyond."

ABOUT THE AUTHOR...
MOHAMMAD CHAICHIAN is Professor of Sociology at Mount Mercy College in Cedar Rapids, Iowa. During his tenure at the University of Dubuque (1986-1993) he taught a course on the citys social history and studied the relation between the citys political economy and its race relations. In the aftermath of Dubuques racial crisis he appeared before the Iowa Advisory Committee to the U.S. Commission on Civil Rights to provide a sociological analysis of the crisis. He has published numerous articles related to urban political economy and immigration issues.