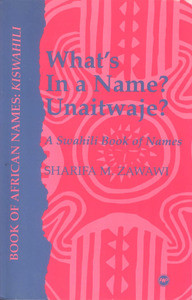 "Most books about African names have included in their discussions names used by Swahili speaking people but the present books is different. It is mostly about the personal names used by the Waswahili people and tells of the meanings these names have. The Waswahili are identified as those people who speak Kiswahili (of any dialect) as their first language and share in its culture. These comprise African people and people of African descent, of different tribal and ethnic identities, who have a common language and culture. In this book, I have included names with which I am well acquainted, some which relatives and friends have suggested to me, and some that I have come across in my reading of Swahili literature.

You will find listed African indigenous Biblical and Islamic names all of which are in use in East Africa today. Many of them represent a lexicon that could be used by different people irrespective of their religion or ethnic group. Many of the religious or historical names suggest a common origin. They are most likely of common origin and derive from some common ancestor language.

This little book should be of use not only to the young people for whom, primarily, it is written , but also to adults who might be interested in learning about the personal names used in a particular region in Africa and their significance."

-from the author's introduction