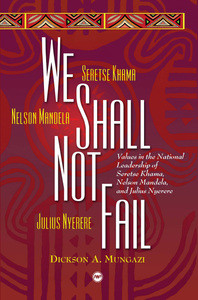 This book focuses on pertinent political and social issues in Botswana, South Africa, and Tanzania during the leadership of Seretse Khama, Nelson Mandela, and Julius Nyerere respectively. It is a critical analysis of the nature of good and effective national leadership in these three nations based upon the values that the leaders embraced to serve their respective countries.

Drawing implications for other countries of the region, the author demonstrates what he considers to be good national leadership by providing insights into the political careers of Seretse Khama of Botswana, Nelson Mandela of South Africa, and Julius Nyerere of Tanzania. The values that these three national leaders shared in common and which made them successful include integrity, loyalty to principle, honesty, respect to democracy, confidence in the ability of the people to make viable contribution to national policy and programs.

ABOUT THE AUTHOR
DICKSON MUNGAZI is Regents Professor of Educational Foundations and History of Southern Africa at Northern Arizona University in Flagstaff. He is the author of numerous articles and books on the problems of national development in Africa and the United States. These include: The Evolution of Organized Society and the Use of Institutional Power, Ideology and National Development in Black Africa, Educational Reform and the Transformation of Southern Africa (co-authored with L. Kay Walker), and The Mind of Black Africa, Educational Policy and National Character: Africa, Japan, United States and Soviet Union.