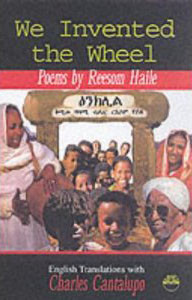 This is the second bilingual collection of the poetry of the contemporary Eritrean poet, Reesom Haile. It follows an earlier anthology, We Have our Voice, which was published in 2000. Haile is widely recognized for his revolutionary modernization of the traditional art of poetry in Tigrinya, one of Eritrea’s main languages. The enormous popular appeal of his poetry–in print and on the Internet—has spilled into the streets of Asmara, where to stroll with Reesom Haile at any hour of the day is to be approached by the young and old—and people who are delighted to quote his lines back to him. Writing in Tigrinya, he joins a growing movement of African authors who are writing in their own languages.

Charles Cantalupo works directly with Reesom Haile to offer versions of Haile’s work which attempts to join two languages and two traditions in a common effort of poetry that is modern yet classical, epigrammatic, and enduring.

“Reesom Haile is that rarest of beings, an Eritrean poet made vivid in translation by Charles Cantalupo!”

“Reesom Haile offers poetry that is at once sensual and seductive, wise and politically clever, and full of wonderful surprises.  This collection sparkles throughout with amazing clarity.  Cumulatively, these poems communicate the author's deep love for life, his country, absolute freedom, and the magic of the word.”

“Reesom Haile is Poet Laureate of Eritrea in the only way possible: elected by the people in the streets.  His countrymen and women know and love his poems by heart, shout them back at him, confront him as if literature might walk, breathe, and engage as life always engages in Asmara, shoulder to shoulder and lip to ear ... Herewith Master Joiner Cantalupo has sifted Reesom's deep simplicity into English poetry prophecy.  If you want to live in the World of Poetry, this is your text!”

Reesom Haile is a poet and scholar who returned to Eritrea after a twenty-year exile. During his exile, he taught Communications at The New School for Research in New York and had a subsequent career as a Development Communications Consultant, working with UN agencies, governments, and NGOs around the world. The first collection of his poems in Tigrinya, Waza Qumneger Ntnsae Hager won the 1998 Raimok prize, Eritrea’s highest award for literature. His second collection in Tigrinya is Bahlna Bahbana (Our Culture Our Pleasure).

Charles Canatulpo worked with Reesom Haile on the Eritrean poet’s first bilingual collection of poems, We Have our Voice.He is the editor of The World of Ngugi wa Thiong’o and Ngugi wa Thiong’o: Texts and Contexts. He is also the author of A Literary Leviathan: Thomas Hobbes’s Masterpiece of Language and Animal/Wo/man and Other Spirits, a book of his collected poetry, 1987-90. His poetry and essays have appeared in many journals and on the internet. He is a Professor of English at The Pennsylvania State University.