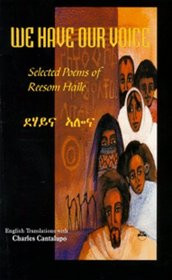 We Have Our Voice is the first bilingual collection of the poetry of the contemporary Eritrean poet, Reesom Haile. Widely recognized for his revolutionary modernization of the traditional art of poetry in Tigrinya, one of Eritrea's main languages, he joins a growing movement of African authors who are writing in their own African languages. This rise of African vernaculars, paralleling the rise of truly independent and democratic African nations, promises a 21st century that will be the African century for literature.

Working directly with Reesom Haile, Charles Cantalupo offers English versions of Reesom Haile's work in an attempt to join-- which is to the Tigrinya concept for the act of poetry, different from the Eruopean identification of poetry with the process of making-- two languages and two traditions in a commom effort of poetry that is modern yet classical, epigrammatic and enduring.

ABOUT THE POETS
REESOM HAILE, poet and scholar, returned to Eritrea after a twenty-year exile, which included teaching in Communications at The New School for Research in New York . The first collection of his poems in Tigrinya, Waza Qumneger Ntnsae Hager won the 1998 Raimok prize, Eritrea's highest award for literature. His second collection in Tigrinya is Bahlna Bahbana (Our Culture, Our Pleasure).

CHARLES CANATULPO is the editor of The World of Ngugi wa Thiong'o and Ngugi wa Thiong'o: Texts and Contexts. He is also the author of A Literary Leviathan: Thomas Hobbes's Masterpiece of Language and Animal/Wo/Man and Other Spirits, a book of his collected poetry, 1987-90. He is professor of English at The Pennsylvania State University.