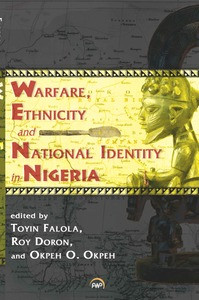 This volume is set in the complex nexus between warfare, ethnicity and national identity in Africa. Analyzing the history of this connection, its basis and dynamics from the pre-colonial period, the book shows how conflicts shaped the Nigerian societies.  It also interrogates the sense in which the failures of the post-colonial African state encourage ethnicity, and demonstrates how and why this development results in conflicts and insurgency wars. It bears relevance in its specific focus on the juxtaposition between pre-colonial and post-colonial warfares, and in particular, its analysis of the intersections between contested identities, the crisis of the post-colonial state and resulting break down of law and order. Using the example of Nigeria, the volume shows how the complexities and dynamics of nation building pose enormous challenge to modern African nations, and proposes the way forward.

TOYIN FALOLA is the Frances Higginbothom Nalle Centennial Professor of History at the University of Texas at Austin and the Mwalimu Julius Nyerere Professor of Modern African History at large at the Benue State University, Makurdi, Nigeria.

ROY DORON completed his PhD at the University of Texas at Austin and he is now an Assistant Professor of History at Winston-Salem State University.

OKPEH OCHAYI OKPEH, Jr. Ph.D. is a Professor of African History in the Department of History, Benue State University. He has contributed numerous scholarly articles in many journals and chapters to several books, and is the current Editor of Journal of Globalization and International Studies.